In a brazen misuse of power, Republic Media Network’s Assistant Vice President Mr. Ghanshyam Singh was arrested this morning at 7:40 am by the Mumbai Police. 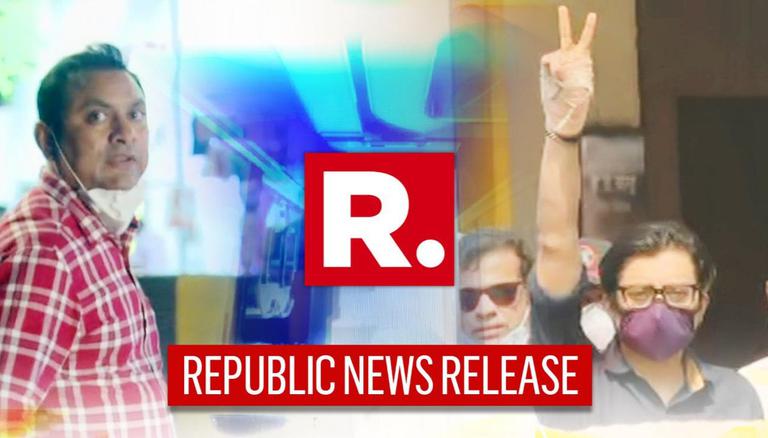 In a brazen misuse of power, Republic Media Network’s Assistant Vice President Mr. Ghanshyam Singh was arrested this morning at 7:40 am by the Mumbai Police. Republic Media Network is shocked at the unchecked malicious campaign of the Mumbai Police that is determined to falsely target and desperately implicate Republic and its members. It is clear this is part of the same vendetta-driven, vengeful and motivated campaign of the Maharashtra state machinery that assaulted and arrested Editor-in-Chief Arnab Goswami.

As Arnab Goswami spends his 7th day in judicial custody and Ghanshyam Singh is arrested on baseless grounds, there has never been a more terrifying state of affairs vis-a-vis an elected machinery exploiting its offices and violating due process to clamp down on an independent media organisation. History is witness to the state excesses being deployed in Maharashtra and shall not forgive or forget those who exercised it.

Mr. Ghanshyam Singh who heads Republic Media Network’s Western Region Distribution has continuously cooperated with the Mumbai Police in the case. In fact, in the spirit of cooperation even in a fake and hollow case, he continually appeared before the Mumbai Police on numerous occasions. He has cooperated throughout and answered all questions of the police to the best of his knowledge and ability. Ghanshyam has personally been through over 40 hours of semi-custodial interrogation, and his current detention crafts a new low in the highhanded tactics of the law and order machinery in the state of Maharashtra which is functioning unchecked.

Ghanshyam has been booked under frivolous sections in a fake TRP manipulation case, which itself doesn’t stand vis-a-vis the evidence. It is significant to reiterate that despite Mumbai Police Commissioner Param Bir Singh’s October 8th news conference on the TRP matter, neither he nor the Mumbai Police has been able to present a single piece of hard evidence linking Republic Media Network to the TRP scam. Therefore, Ghanshyam’s arrest, like Arnab’s illegal arrest, is born out of prescripted vendetta instead of evidence and facts.

The entire TRP case against Republic has been concocted on the basis of an FIR that names another channel. It is well known that a document by complainant Hansa Research Group Pvt Ltd names the same channel which is in the FIR and not Republic. Additionally, it is now in the public domain and before a court of law that Hansa has filed a case that alleges the Mumbai Police Commissioner, Sachin Vaze and the state of Maharashtra were harassing the top brass of the company to implicate Republic Media Network in the TRP case.

Republic Media Network and the people recognise that all such acts of malice are aimed to throttle the network, its news coverage ability and thereby attempt to mow down any semblance of a free press in the state of Maharashtra. Coercive methods, illegal arrests, baseless detentions and overtly false cases will not stop Republic from doing its journalistic duty, or from fighting against this anarchy in the courts of law and courts of public opinion.

We appeal to right-thinking citizens to raise their voice and continue their campaign for justice.

Like the truth, we stand firmly with Ghanshyam Singh and Arnab Goswami and will continue to fight for justice to prevail.