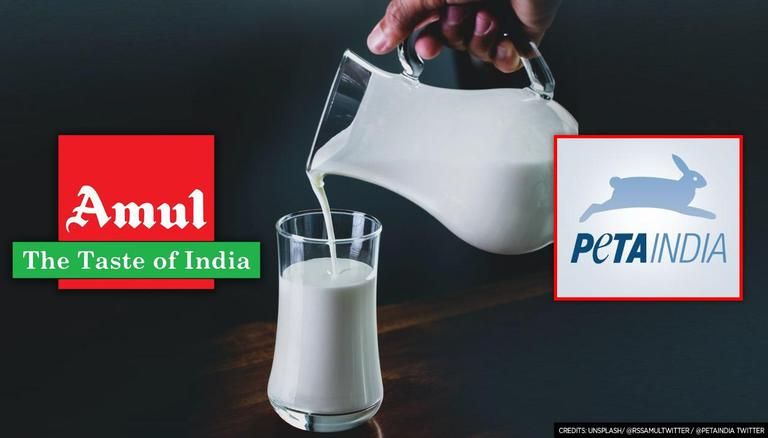 
The ongoing dispute between People for the Ethical Treatment of Animals in India (PETA India) and Amul intensified on Friday as the former called on the Indian dairy giant to stop attacking plant milk by fearmongering and spreading fake stories, even as the nutritional benefits of plant-based milks do indeed remain a subject of debate irrespective of Amul's claims.

In a strongly-worded statement, the Vegan Outreach Coordinator of PETA India, Dr Kiran Ahuja, said Amul should stick up for farmers by being first in line to support the opportunities brought in by the vegan market. He reasoned that non-dairy food products are made from plants grown on Indian farms, thus providing a solid, sustainable market for farmed goods. It is to be noted here, however, that India is not known as a major producer of the primary crops from which plant-based milks are currently made - Almonds & Soya - while it is far and away the biggest producer of milk in the world.

The PETA official also stated that consumers are increasingly opting for plant milk because they don’t want to support the beef and leather industries, want better health and to help fight climate change. Ahuja said Amul can follow the example of other meat and dairy businesses that investing in non-dairy milk and food products. He mentioned that India’s own Epigamia dairy brand also sells coconut yoghurt and almond milk – vegan options for daily products.

READ | 'Amul shown itself to be a bully, unable to appreciate concern for animals': PETA India

“Attacking plant milk by fearmongering and spreading fake stories makes Amul seem out of touch. Instead of feeling threatened, Amul can follow the example of other meat and dairy businesses that are embracing consumer interest in vegan eating by making or investing in non-dairy milk and food products themselves. India’s own Epigamia dairy brand also sells coconut yoghurt and almond milk,” the Vegan Outreach Coordinator of PETA said.

The animal rights organisation’s response comes days after Amul vice-chairman Valamji Humbal urged Prime Minister Narendra Modi to ban PETA India and accused it of attempting to ruin the livelihood of people. On May 28, PETA had asked Amul to switch to producing vegan milk. In a letter to Amul Managing Director R S Sodhi, PETA said the dairy cooperative society should seek to benefit from the booming vegan food and milk market. Following this, Amul slammed PETA and said the NGO was attempting to ruin the livelihood of people.

Responding to the allegations, PETA India's CEO Dr Manilal Valliyate said Amul has shown itself to be a bully, unable to appreciate the public’s concern for animals and a business that apparently cannot change despite changing consumer trends. “But no amount of bullying is going to change the fact that vegan eating is taking the world by storm,” he asserted.