Prime Minister Narendra Modi will be launching a farmers welfare scheme from Mathura, in Uttar Pradesh on Wednesday. The National Animal Disease Control Programme (NADCP) will be launched to eradicate foot and mouth disease and Brucellosis in livestock, in an effort to increase the income of the farmers. The NADCP is fully funded by the Centre with disbursement of Rs12, 652 crore for the next five years. PM Modi is aiming to achieve the goal of doubling the income of farmers by 2022. 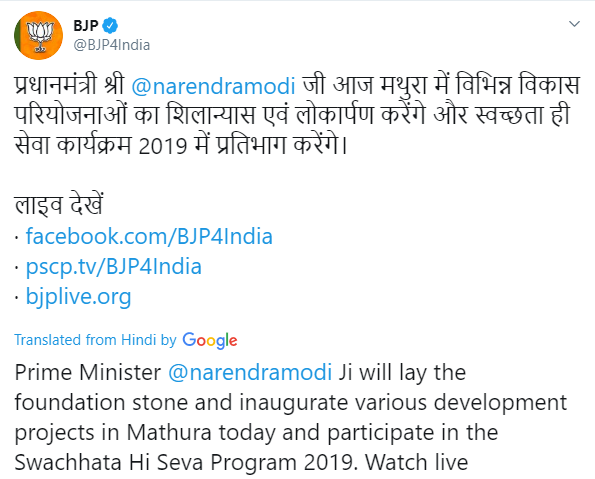 The PM will be inaugurating several programmes from Mathura today and will participate in 'Swachhata Hi Sewa' campaign. The NADCP program aims to vaccinate 36 million female bovine calves annually to eradicate Brucellosis disease caused by bacteria from the genus Brucella. The Prime Minister's objective with these campaigns is to curb all the critical diseases affecting livestock by 2025 and completely eradicate it by 2030. National Artificial Insemination Programme will also be inaugurated on September 11. Workshops will be held at Krishi Vigyan Kendras on subjects such as disease management in livestock, vaccination, artificial insemination and productivity in all 687 districts of India.

On Monday PM Modi addressed the 14th Conference of Parties of United Nations Convention to Combat Desertification (UNCCD) in Greater Noida. He spoke about the need to re-think our plastic use and the desertification of land that is taking place. The PM also stressed on issues like land degradation and water crisis in several regions, stating the negative impact of climate change faced by the world. To combat the problem of water pollution, the Indian government has decided to ban single-use plastic which is polluting the oceans and also ending up in the food chain of humans.

Union Minister for Environment, Forest and Climate Change, Prakash Javadekar discussed the steps taken by India to combat the problem of climate change. He announced that India has reached half of its renewable energy resource target of 175 GW. He also shared that India's green cover has increased in the last five years and is now inching towards its aim of 33% of green cover. 'The government has promoted e-vehicles by offering various concessions on taxes and has set up a water resource ministry which was used to tackle desertification in Kutch.' Prakash Javadekar said.

Read: India Is Halfway Towards Its Renewable Energy Target Of 175GW