Prime Minister Narendra Modi will inaugurate the Integrated Check Post of the Kartarpur Corridor at Dera Baba Nanak in Punjab's Gurdaspur on Saturday.

Prime Minister Narendra Modi will inaugurate the Integrated Check Post of the Kartarpur Corridor at Dera Baba Nanak, Gurdaspur in Punjab on Saturday. According to a press release, the PM will pay obeisance at Ber Sahib Gurudwara at Sultanpur Lodhi prior to the inauguration and will later participate in a public programme at Dera Baba Nanak. Republic TV has access to the PM's packed schedule on a historic day.

READ | PM Modi, Devotees To Reach Kartarpur Ahead Of Its Inauguration

PM Modi will be visiting Amritsar, Sultanpur Lodhi and Dera Baba Nanak in Gurdaspur. He is scheduled to arrive at around 8.30 in the morning in Amritsar and will be received at the airport by Punjab Governor VP Singh Badnore along with state cabinet minister Sukhbir Singh Sakaria, District Magistrate of Amritsar and the Police Commissioner. PM Modi will then head to Sultanpur Lodhi in a helicopter and there he will be received by Punjab Chief Minister Capt Amarinder Singh along with local MLA Navjeet Cheema, MP Jasbir Singh Gill and few senior officials of the state. 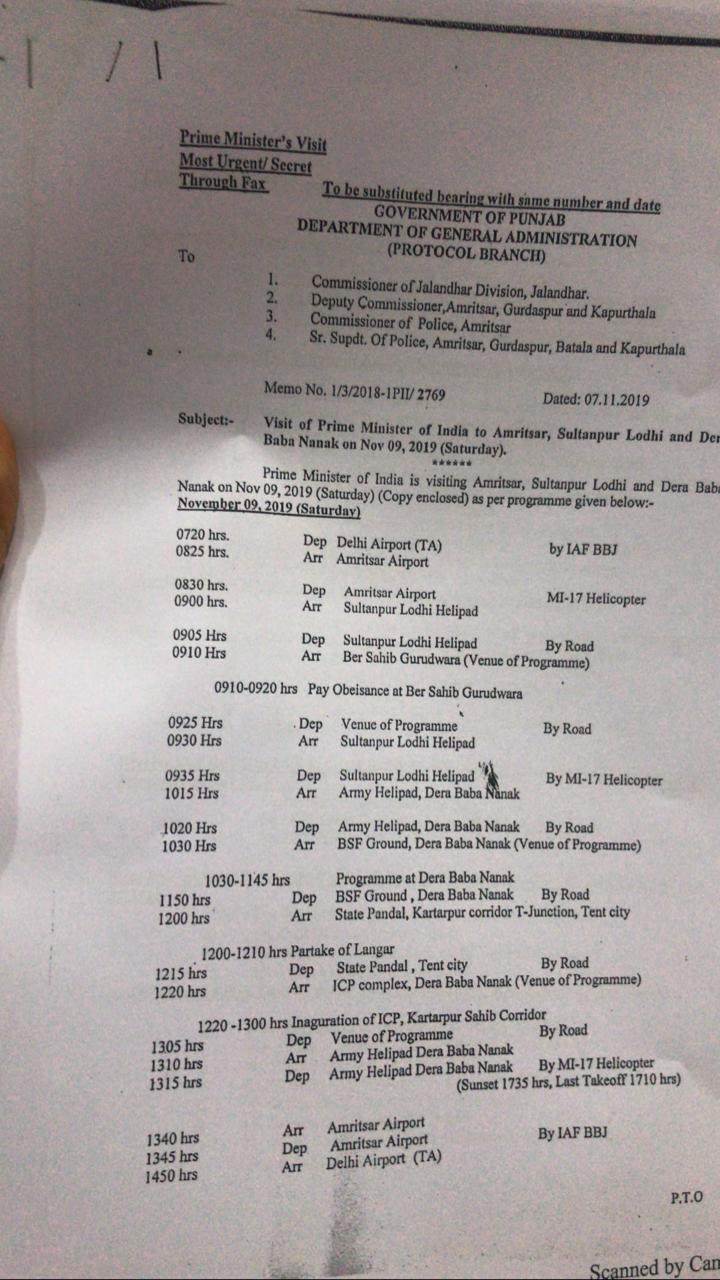 The Prime Minister will then head to Ber Sahib Gurudwara by road and pay obeisance there. He will then head back to Sultanpur Lodhi helipad and will be flown to Dera Baba Nanak to be received by Punjab Chief Secretary Karan Avtar Singh. There at the Border Security Force ground, PM Modi will participate in a public programme.

After the programme, PM Modi will travel via road to the state pandal at the Kartarpur Corridor T-junction. There, he will be part of a state Langar along with various state leaders like Congress Punjab chief Sunil Jakhar and senior officials. The Prime Minister will then head to the ICP Complex where the Integrated Check Post of the Kartarpur Corridor will be inaugurated. The event is scheduled to begin at around 12.30 in the noon and will be attended by most senior officials in the state. There at the Passenger Bus Terminal, he shall flag off the first batch of pilgrims going to visit the Sikh holy shrine of Kartapur Sahib in Pakistan. The check post is the point from where Sikh pilgrims from India will head towards Kartarpur.

After a jubilant affair, the PM will head back to the Army helipad at Dera Baba Nanak by road. He will be flown to the Amritsar airport and will take off for Delhi.