Prime Minister Narendra Modi To Address Nation At 10 AM On Tuesday, April 14, Amid Covid

Prime Minister Narendra Modi will address the nation at 10 AM on April 14 on Tuesday, PMO official account announced on Monday, ahead of the end of the lockdown

Prime Minister Narendra Modi will address the nation at 10 AM on April 14 on Tuesday, PMO official account announced on Monday. On Tuesday, the 21-day lockdown which is imposed to curb the spread of the novel Coronavirus is suppose to end. Prime Minister Modi is expected to announce the lockdown extension after consulting several states about it. States like Maharashtra, Odisha, Punjab etc have already extended the lockdown till April 30.

Prime Minister @narendramodi will address the nation at 10 AM on 14th April 2020.

The Prime Minister on Saturday held a video conference with chief ministers primarily to take their feedback on whether the 21-day nationwide lockdown should be extended beyond April 14 to stem the tide of the infections.

The initial visuals of the meeting showed Modi wearing a white mask during the interaction which was among others attended by chief ministers -- Amrinder Singh (Punjab), Mamata Banerjee (West Bengal), Uddhav Thackeray (Maharashtra), Yogi Adityanath (Uttar Pradesh), Manohar Lal (Haryana), K Chandrashekhar Rao (Telangana) and Nitish kumar (Bihar). The Central government is understood to have also obtained views on the issue from all the relevant agencies and stakeholders involved in the efforts to contain the spread of the pandemic.

According to the latest update, the number of total cases in the country has climbed to 9,152, while the death toll stands at 308. 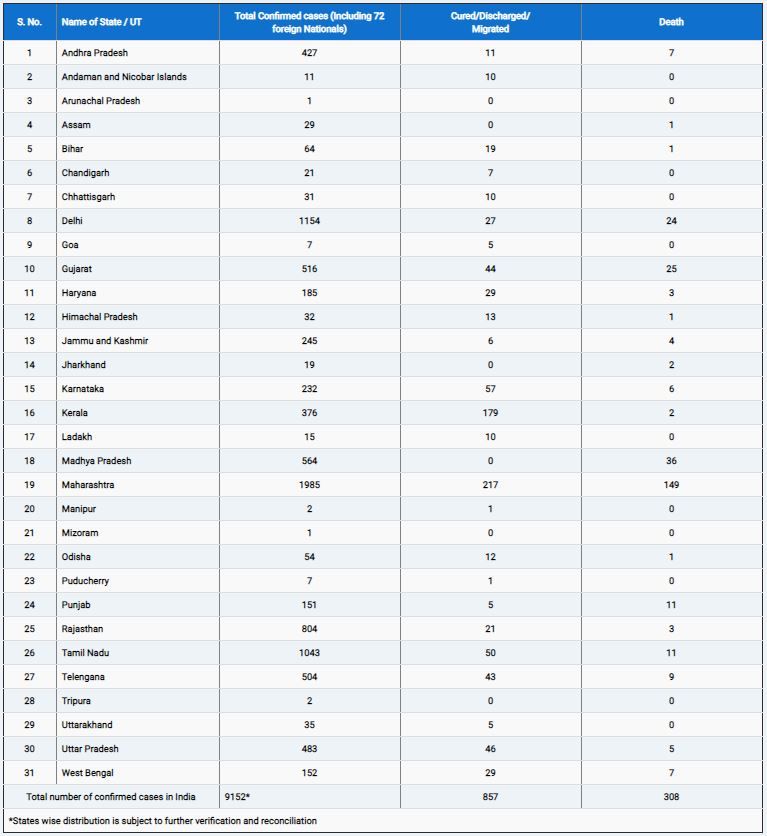 PEOPLE HAVE PLEDGED SO FAR
LATEST NEWS
View all
8 hours ago
If states want up migrant workers back, they have to seek permission: adityanath
8 hours ago
Death of nine people in telangana doesn't appear to be suicide, says forensic expert
3 hours ago
'only 41 shramik trains for maha despite being prepared to run 125 trains': piyush goyal
8 hours ago
52 new covid-19 cases in j&k, tally 1,621
8 hours ago
Up govt withdraws order prohibiting use of mobile phones by covid patients in isolation wards