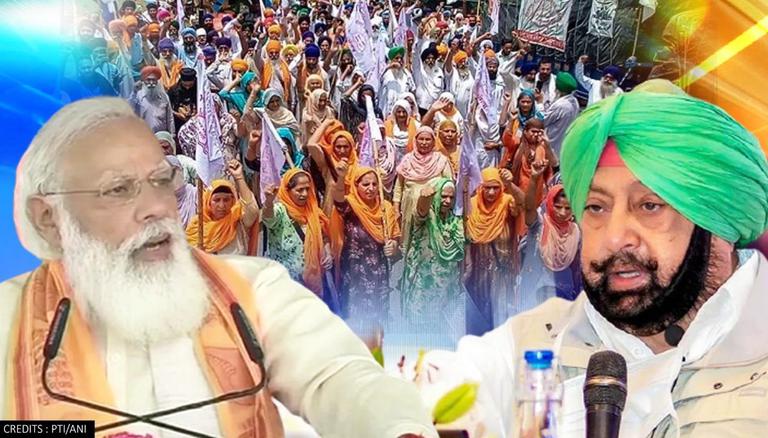 
Punjab CM Captain Amarinder Singh on Friday wrote a letter to Prime Minister Narendra Modi urging him to immediately resume dialogue with the protesting farmers. Captain Amarinder made references of heightened cross-border threat and increased drone and other terrorist activities by ISI-backed groups, while he warned the Prime Minister that the powers across the border may try to play upon the charged emotions of farmers of Punjab as the state has a long and live international border with Pakistan.

"The situation is presently under control but I fear that provocative statements and conduct of some political parties and the emotional backlash might create law and order problems and also lead to irreversible damage to the hard-earned peace in the State," the Chief Minister said in his letter to the Prime Minister.

CM Amarinder also cited intelligence reports suggesting that ISI-led Khalistani and Kashmiri terror outfits are planning terrorist actions in the state which is slated for assembly polls early next year. The CM stated that protests have been "more or less peaceful so far", although the Republic Day violence that began after the tractor rally by farmers turned violent, leading to widespread vandalism, thus injuring more than 400 Delhi Police personnel.

The Chief Minister has also proposed to lead an all-party delegation from Punjab for discussion with the Prime Minister to find a durable and amicable solution to the problem of the prolonged farmer agitation as CM Amarinder believes it is threatening the social fabric of the state and impacting the economic activities as well.

Besides the threat to the state’s socio-economic fabric due to the unrest caused by the Farm Laws,  the day-to-day political activities in line with people's democratic rights are also adversely affected due to the agitation, though the State Government has tried its best to maintain law and order, CM Amarinder said in his letter to PM Modi.

Chief Minister said that the farmers need to be categorically reassured about their concerns regarding the provisioning of MSP and continued public procurement of wheat and paddy. However, the Central Government on multiple occasions has given assurance to the farmers that the MSP mechanism will continue to exist even after the implementation of new farm laws.

CM Amarinder's letter comes on a day when BKU spokesperson Rakesh Tikait, who has been at the helm of farmers' agitation, has issued a 'Civil War threat' to the Centre while giving a deadline of two months to repeal farm laws.

"We have called a Mahapanchayat on September 5 where we will be deciding the future course of action. The government has two months, and I think it should initiate talks," Tikait said, underlining that he feels that a civil war was inevitable while he made it clear that the farmers are not going back.

Protest against the new farm laws

It is pertinent to note that the Central Government has held 12 rounds of deliberations with the agitating farmers and also urged them to hold clause by clause discussions over the farm laws while ruling out the repeal of the farm laws. Also what's important to note is Captain Amarinder Singh was a part of the Central Committee which discussed and framed the clause of the farm bills, leading to their passage in the Parliament.

The protesting farmers and their unions fear that the APMC market system will cease to exist or will weaken with the implementation of new farm laws. The protestors also believe that the Minimum Support Price (MSP) mechanism is also under threat due to the new farm laws. However, to assuage the protesting farmers and to strengthen the APMC markets, the Centre has made APMC Mandis eligible to avail financial support from the Rs 1 lakh crore Agriculture Infrastructure Fund to expand the regulated markets' capacity and provide better facilities to farmers.

Also, on multiple occasions, the Centre has given assurances that the MSP mechanism will continue even after the implementation of farm laws and it also agreed to give a written assurance. The government also procured the farmers produce in record quantities in the following period, however, the protesting farmers have reiterated the demands of repealing the farm laws. The protesting farmers - majorly from Punjab, Haryana and some parts of UP - have even refused to hold deliberations with the Supreme Court-appointed panel to understand the issue of the farmers with respect to the farm laws.