Congress leader Rahul Gandhi on Thursday wrote to Kerala Chief Minister Pinarayi Vijayan after the death of a schoolgirl who had sustained a snakebite in her classroom. Gandhi, in his letter, stated the school's "crumbled infrastructure" needs urgent attention of the state government. In his letter he said, "One of the oldest high schools in Sulthan Bathery, Sarvajana Higher Secondary School's crumbling infrastructure requires the urgent attention of the state government. The absence of a conducive learning environment demoralises students and parents alike." A 10-year-old girl died after she was bitten by a snake inside her classroom at Sultan Bathery in Wayanad district on Thursday. 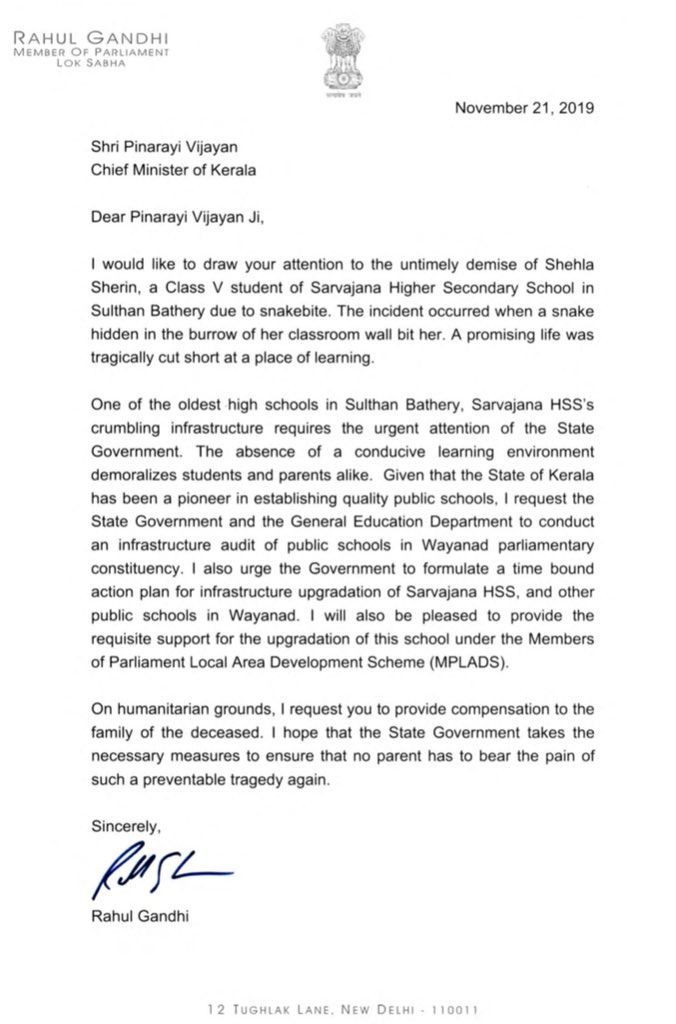 Kerala Education Minister C Raveendranath on Thursday ordered an enquiry into the death. Meanwhile, the Primary Teacher Sajil CV of Bathery Government Sarvajana Vocational Higher Secondary School has been suspended pending an enquiry by the Deputy Director of Education Wayanad. According to reports, the deceased's classmate alleged that the teacher continued to take the class, despite the snake biting the girl. The classmate further alleged that the teacher said that the child's father will take her to hospital. However, by that time the girl's leg had turned blue, stated reports.

According to reports, a Class-V student died after a snake bit her in her classroom in Wayanad district, of which Rahul Gandhi is MP. The deceased has been identified as Shahla Sherin (10). Reports stated that the snake was hiding inside a burrow of the classroom wall. Further reports stated that a case has been registered regarding the matter.  Further, the Wayanad district collector, Adeela Abdulla termed the incident as "most unfortunate" and stated that action will be taken against those responsible. According to reports,  the Additional district magistrate has been asked to visit the school for inspection.

Read: BJP's Rakesh Sinha: 'Rahul Gandhi does not know what JPC is'

Read: Sonia Gandhi has to be full-fledged Congress chief, Rahul not willing: Moily