Congress' national spokesperson Randeep Surjewala on Friday left the party embarrassed on social media while trying criticise the Modi-led government. The Congress leader on Friday tweeted saying that Indian rupee had fallen to such a low value that even the Bangladeshi Taka costs more than Rupees. However, after being pointed out that he had made a grave error and Indian Rupee still stands strong valuing more than Bangladeshi Taka, he deleted the tweet. Randeep Surjewala had also attached PM Narendra Modi's video when he was the Opposition leader during the Manmohan Singh government.

In his tweet, he said, 'Forget the US Dollar, Rupee falls below even Bangladeshi Taka, trading at:-  1 Bangladeshi Taka = Rs 1.18. Who is responsible for this? Who brought the ruin? Listen to the answer in PM Modi's words' 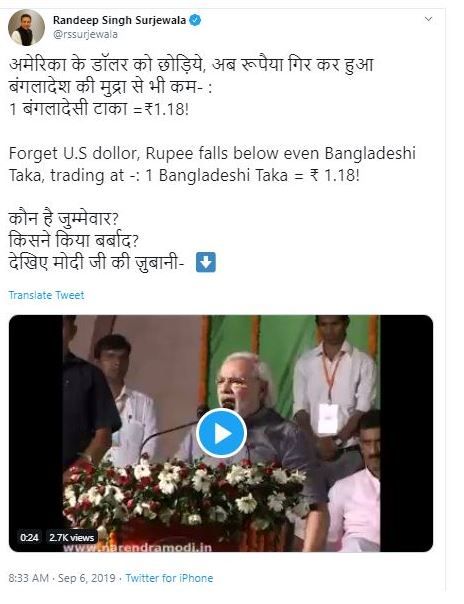 Netizens pointed out to Surjwala that the opposite of what he was stating was true. The Indian Rupee cost 1.18 Bangladeshi Taka. Following this Randeep Surjewala deleted his factually incorrect tweet. However, the Congress leader who often criticises the Centre often based on the narrative propagated by the Tukde gang, this time was himself caught spreading lies.

Congress leader Priyanka Gandhi Vadra slammed the Bharatiya Janata Party (BJP) government at the Centre as the truck sales in August fell by nearly 60%. She opined that there was a news item about the recession every day. She further added that the government continued to maintain silence on it. Vadra observed that both these aspects were very dangerous. Moreover, the Congress leader contended that the government neither had any solution nor did it have the strength to reassure the people of the country. Mere talk, giving excuses and spreading rumours would not work, she observed.