Expressing 'pain' over Metro Man E Sreedharan's letter to PM Narendra Modi opposing the free metro rides for women in Delhi, Deputy Chief Minister of Delhi Manish Sisodia wrote to E Sreedharan expressing disbelief in the former's view that this would set "the wrong precedence" to the other state metros.

In a letter to Sreedharan, Sisodia wrote, "Pained and surprised by your decision to oppose the proposal of the Delhi government to bear the cost to provide free ridership for women in the Delhi Metro Rail Corporation trains."

"By Delhi Metro's own admission, free ridership for women will increase women ridership by 50%. Delhi Metro should rejoice it and not oppose it. Even after providing the free ridership, the daily ridership will only go up by three lakhs on daily basis, which will still be less than the 40 lakhs capacity the facility was originally designed for," he added in his letter.

Sisodia blamed the high fares for the falling ridership of the Delhi Metro and said that it needs to drastically improve its efficiency and become cost competitive. Expressing belief in the decision, Sisodia said that the main intention of introducing free ridership is to ensure women safety and improve the air quality in the city. He added that it is a revolutionary step to empower women and it will open up immense opportunities for them.

He urged Sreedharan to reconsider the proposal of the Delhi government and sought his blessings to go ahead with the 'progressive step.' 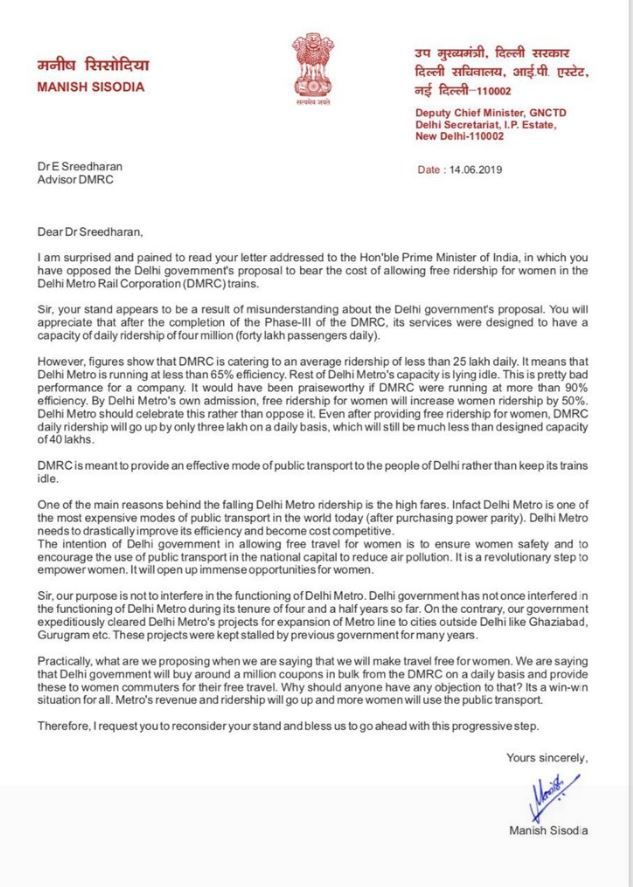 E Sreedharan had earlier written a letter to PM Modi, requesting him to intervene in the matter, and had said that the freebie scheme was not feasible as it would drain the exchequer. Sreedharan had created a strong 'no concession' policy ever since the operations began in 2002. Making a strong point to support his argument, he had written stating that even former Prime Minister late Atal Bihari Vajpayee had purchased a ticket to travel on the metro from the station where it was inaugurated. He also mentioned that the workers of the Metro purchase tickets for travel on the medium.

Sreedharan added in his letter to the PM that the Delhi government could not take a unilateral decision in the matter as the Delhi Metro was co-owned by the Centre and the state. He said that if the State government wanted to provide free rides to women, then they should give the money directly to them instead of inflicting loss on Delhi Metro.