Rezang La Battle: All You Should Know About Charlie Company's Valour In India-China War 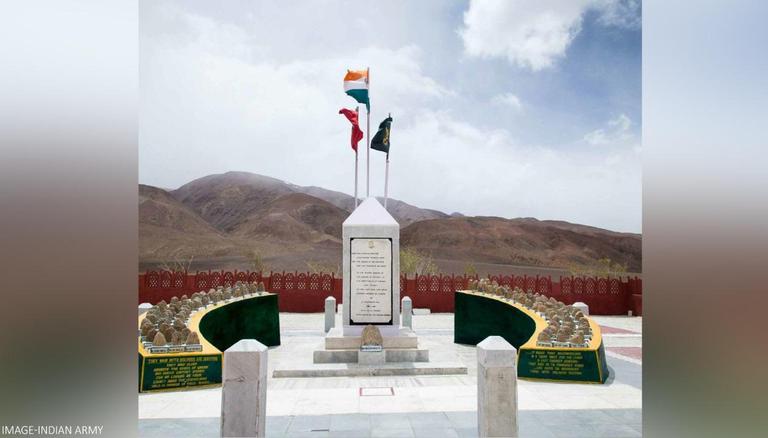 
The Rezang La battle is remembered in the history of India's military expeditions owing to the tenacity of the heavily outnumbered Indian Army who gave a bloody nose to the People's Liberation Army (PLA) in 1962 India-China war. The repel attacks toward a better-equipped army under the leadership of Major Shaitan Singh is embedded firmly in modern history which prevented Chinese occupation of the entire Ladakh region.

The clash refers to valiant retaliation of a platoon called Charlie Company of the 13 Kumaon battalion which fought back to the last man while blocking Chinese troops from entering the ridge into the Chushul Valley.

The Indian Army's 'Charlie' company was led by Major Shaitan Singh, who was awarded the country's highest gallantry award Param Vir Chakra posthumously. The LAC war memorial, erected in Rewari, denotes 110 jawans out of 120 in the Company who were martyred while 1,300 Chinese army personnel were killed in the war. Later, the Chinese had officially admitted that 500 casualties were attributed to the Rezang La war.

Reports suggest that an Indian search body visited the battlefield in Eastern Ladakh on February 10, 1963, when they revealed the astonishing discovery of frozen bodies of Chinese soldiers who died by taking bullets while holding guns and ammunition in their hands. An archived interview of a radioman present at the time of the War revealed, "They (dead Chinese soldiers) were lying scattered like berries in a market."

READ | BSF counters allegation made by TMC, avers every complaint dealt with seriously

The retaliation and resistance of the Charlie Company did not only obstruct China's advance but saved the Chushul airport from a possible Beijing occupation of the whole of Ladakh by 1962. Notably, the Charlie Company comprised Ahirs of Punjab who fought the battle at 18,000 ft. Reports suggest that the Rezang La battle started at 3:30 am on November 18 with the Chinese intending to block the road link between Leh and Chushul via Dungti. The surviving soldiers claim the last round of guns by the Indian Army sounded at 10 pm on November 18 wherein only 10 out of the 120 survived to narrate the tale.

According to author Shiv Kunal Verma's book - "1962: The War That Wasn't", "The Chinese threw everything at their disposal to blast out Shaitan Singh's men. Apart from heavy artillery that systematically blew up the stone sangars, the Chinese lined up 132mm rockets, 120mm heavy mortars, 81 and 60 mm medium mortars and 75 and 53 mm RCL guns in a direct firing role."

As against superior resources and military advantages to the Chinese troops, the Major Shaitan Singh-led Charlie Company put forth a fight emitting valour and utmost sacrifice. The Company's solid initial defence and onslaught surpassed China's anticipation and subjected them to heavy losses.