Sachin Tendulkar shared a picture of him posing with the Armed Forces on the occasion of Air Force Day on Tuesday. Sachin had earlier congratulated IAF.

Sachin Tendulkar on Tuesday congratulated the Indian Air Force (IAF) on its 87th Air Force Day. The Master Blaster took to social media and extended his warm wishes to the Indian Air Force. At the same time, the Little Master also highlighted Prime Minister  Narendra Modi's healthy and clean India mission and said that he is happy to see people's enthusiasm for the mission. 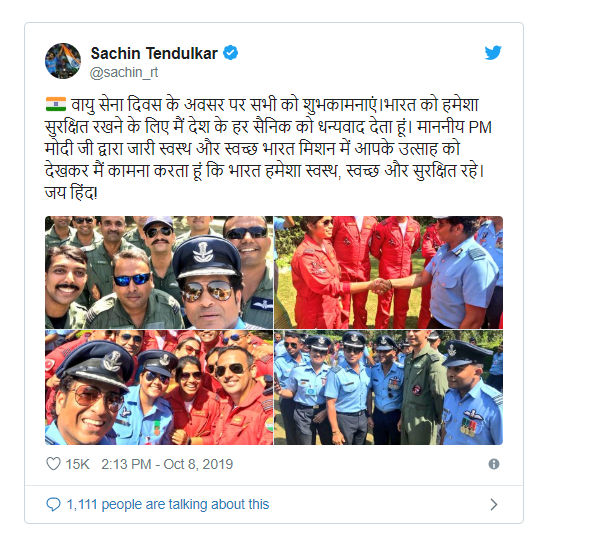 Now, Sachin has also given a special mention about some of the officers in the Armed Forces.

Sachin Tendulkar with the Armed Forces

On the occasion of  87th Air Force Day, Sachin Tendulkar took to social media and shared an image of himself along with the members of the Armed Forces including the likes of  Air Chief Marshal RKS Bhadauria (Indian Air Force), General Bipin Rawat (ADGPI of the Indian Army), Admiral Karambir Singh (Indian Navy) and RKS Bhadauria's better half Mrs. Asha Bhadauria.

The first batsman to score a double century in ODI and also the only player to score 100 ODI centuries, Tendulkar is widely regarded as the best batsmen in international cricket. On the occasion of 87th Air Force Day, Tendulkar extended his warm wishes and regards to the Indian Air Force and thanked all the soldiers for ensuring the safety of India. In his tweet, Tendulkar also said that looking at the enthusiasm of people for the 'Fit India, Clean India' mission, he hopes that India is fit, clean and secure.

Earlier today, PM Modi congratulated the Indian Air Force personnel on the Force's 87th Foundation Day and said that the Force has played a key role in all major events. Union Minister of Defence, Rajnath Singh who is currently on a three-day visit to France also tweeted his wishes and said that the IAF is a shining example of exemplary courage, fortitude, determination and impeccable service to our nation. The Defence Minister will also receive the first Rafale jet to be inducted into the IAF.