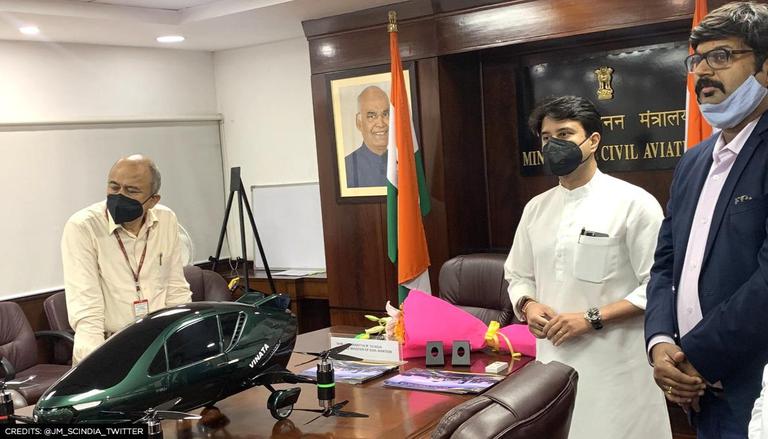 
Union Civil Aviation Minister Jyotiraditya Scindia on Monday, September 20, reviewed the model of 'Asia's First Hybrid flying car' that will be used for transporting people, cargo. The model developed by the young team of Vinata AeroMobility will be used for medical emergency services.

Jyotiradtiya Scindia wrote on Twitter, "Delighted to have been introduced to the concept model of the soon-to-become Asia's First Hybrid flying car by the young team of @VAeromobility".

Delighted to have been introduced to the concept model of the soon-to-become Asia’s First Hybrid flying car by the young team of @VAeromobility . 1/2 pic.twitter.com/f4k4fUILLq

He further said, "Once this takes off, flying cars would be used for transporting people and cargo, as well as for providing medical emergency services. My best wishes to the team. #DroneRevolutionBegins".

According to the flying car manufacturer, the fully autonomous hybrid-electric VTOL vehicle once transformed into reality will be capable of carrying two passengers at a time. The vehicle will be powered by a co-axial quad-rotor system that draws energy from eight BLDC motors. These motors come with eight fixed pitch propellers and biofuel will be used for powering the motors of the vehicle.

The vehicle can carry a maximum weight of 1,300 Kg and can fly up to 60 minutes at a top speed of 120 kmph. Referring to the range of the car, the manufacturers claimed that the flying car can fly up to 100 km without refuelling and can fly at a maximum height of 3,000 ft from ground level. In terms of aircraft safety, even if one rotor of the vehicle fails, other worker motors and propellers to a safe landing.

With increased road traffic in the cities, the sky is the only alternative for commuting, is the take of Urban transportation experts who have been advocating for such possibilities. Adding on more convenience to the model, the manufacturers explained that the flying cars can run on roads and fly in the sky, providing more convenience for the transportation sector. Platforms like Uber has been planning to introduce flying car fleet with reduced time and lower congestion on roads.

One of the conventional auto giants, Hyundai, the South Korean automaker, has demonstrated a similar concept where flying cars could be used for city commuting.