The work for the renovation of the clock tower will begin in a couple of days from now and is expected that within a month's time, it'll be open for tourists 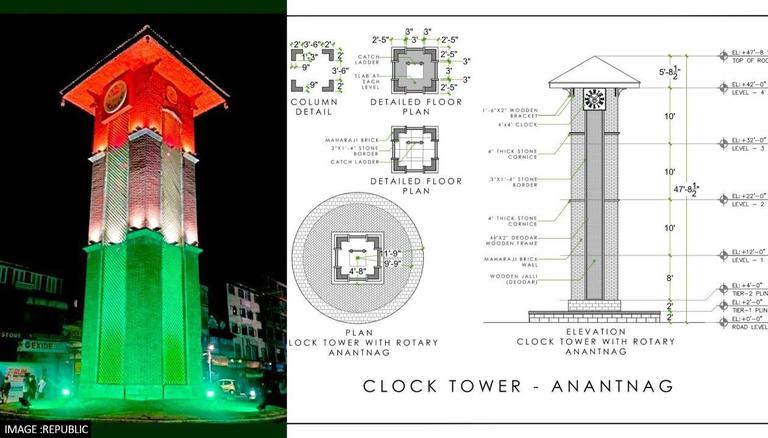 
In uplifting news from the Kashmir Valley, District administration in South Kashmir’s Anantnag has decided that Lal Chowk in Anantnag will soon have a renovated look similar to the Clock Tower & Rotary of the iconic Lal Chowk at Srinagar. This is being done so as to make it attractive for those coming to Kashmir Valley and to change the perception of Anantnag district. The work for the renovation of the clock tower will begin in a couple of days from now and is expected that within a month's time, the Clock Tower of Anantnag shall be ready to attract tourists from across the world.

Ahead of the Independence Day celebrations last year, Srinagar's iconic clock tower was illuminated with the lights of the Tricolour. Tweeting the pictures of the illuminated clock tower, Srinagar Mayor Junaid Mattu had informed that new clocks were being fitted. India celebrated its 75 years of Independence on August 15, 2021.  "We have illuminated the Clock Tower (‘Ghanta Ghar’) at Lal Chowk in colours of the Tricolour ahead of Independence Day. New clocks fitted. Well done Team Srinagar Municipal Corporation," he had said.

Srinagar's Lal Chowk has immense historical significance in the country. It was the place where the first Prime Minister of India Jawaharlal Nehru had hoisted the Indian National Flag in the year 1948 after India had beaten Pakistan's attempt to annex the region. It is also the place where Sheikh Abdullah, the first elected Prime Minister of Jammu and Kashmir after its accession to India, had extended his support to Nehru and India by saying "Man Tu Shudam, Tu Man Shudi, Taqas Na Goyed, Man Degram Tu Degri (I became you and you became I, so none can say we are separate)". In the 90s, the then Bharatiya Janata Party (BJP) president Murli Manohar Joshi had unfurled our National Flag on top of the Clock Tower on Republic Day when several separatists had dared people to raise the Tricolour in the area. The tower and the area wore a dishevelled look for years, however, but a new life was breathed into them with the Tricolour revamp.