The depression over the north coastal Tamil Nadu has weakened into a well-marked low-pressure area and the associated cyclonic circulation has extended. 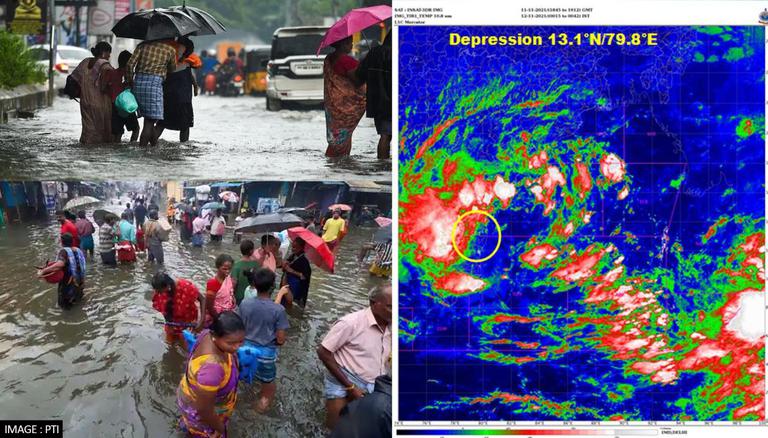 
The India Meteorological Department (IMD) has predicted light to moderate rainfall in various places over Tamil Nadu, Puducherry, coastal Andhra Pradesh, Karnataka, and Kerala over the next 24 hours. In its weather forecast bulletin on Friday, the IMD informed that the depression over the north coastal Tamil Nadu has weakened into a well-marked low-pressure area and the associated cyclonic circulation has extended up to 5.8 km above mean sea level.

"Under its influence, Light to moderate rainfall at most places with heavy rainfall at isolated places very likely over Tamil Nadu, Puducherry, coastal Andhra Pradesh, Rayalaseema south interior Karnataka and Kerala during next 24 hours", it added.

Earlier on Thursday, November 11, a red alert was also issued by the IMD in Cuddalore, Vilupuram, Sivaganga, Ramanathapuram, and Karaikal following heavy rainfall across the city. Due to this, holidays were declared in schools, colleges and several government offices by the state government.

Tamil Nadu has been witnessing heavy rainfall over the past few days resulting in water logging and flood-like situation across the state. The weather conditions came under the view of the formation of a depression over the Bay of Bengal causing heavy rainfall in the state and parts of Puducherry. Meanwhile, the state government along with concerned authorities is carrying out rescue and relief operations across Tamil Nadu, while more rainfall has been predicted for the state and some other southern states. The Met Dept on Friday has also predicted thunderstorms with heavy rains in Nilgiris, Coimbatore, and Kanyakumari districts.

The state government has also declared a local holiday for nine districts including Chennai, Kancheepuram, Thiruvallur, Chengalpattu, Cuddalore, Nagapattinam, Thanjavur, Thiruvarur, and Mayiladuthurai, being the most affected ones.

Similarly, the Hyderabad Met Department has also predicted light to moderate rainfall in several districts of Telangana in the next 48 hours due to the depression in the Bay of Bengal.

With knee-deep water across Chennai and parts of the state, relief and rescue operations are underway and efforts are being made to remove the stagnant water from such areas. As a result, subways and roads are also closed due to waterlogging, informed Chennai police.