A rare bird group known as the Great Eared Nightjar was discovered in Kakopather, Assam's Tinsukia district, the bird was rescued by the locals. 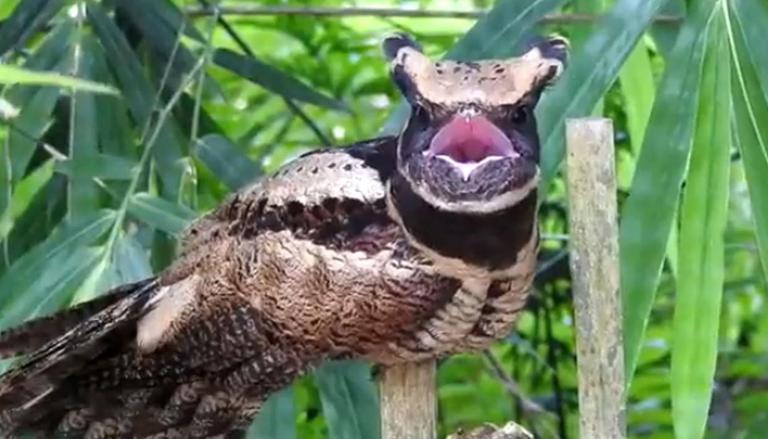 
A rare bird group known as the Great Eared Nightjar was discovered in Kakopather, Assam's Tinsukia district last week. The bird was rescued by the locals, who then alerted the forest service. Forest Officer Pirasudan B posted the video to his official Twitter account with a caption, "GREAT EARED NIGHTJAR was spotted last week in Upper Assam in Kakopathar. A VERY RARE SIGHTING IN ASSAM. Kudos to Villagers for rescuing the bird and promptly informing @assamforest"

The Great Eared Nightjar belongs to the Caprimulgidae family of nightjars. It is the largest of the bird family's species. The bird can be found throughout Southeast Asia, including Sri Lanka, Bangladesh, India, Indonesia, Laos, Malaysia, Myanmar, the Philippines, Thailand, and Vietnam. Subtropical or moist lowland tropical woods are its natural habitat.

The bird flew away at night, came back the next day

The Sentinel reported that Deepak Mahanta, a local resident, had seen the bird there a few weeks ago. Surprisingly, the bird flew away at night, presumably in search of food, but returned to the same spot the next morning. When Deepak informed his neighbours about the bird, they came in droves. When a team of forest department personnel inspected the spot, the bird was identified as a Great Eared Nightjar. These birds are usually found in South India and despite the fact that Assam was also its natural habitat, the forest personnel predicted that it would become extinct.

According to The Sentinel, locals couldn't ascertain when the bird arrived in their village and settled in a tree. One man who saw and rescued the bird said that when he first saw the bird, he mistook it for a cat. But as soon as he got close to it and realised that it was a bird.

WE RECOMMEND
Assam: MP Gaurav Gogoi believes Congress should fight the BJP on its own in the state
'COVID was sent by God’s supercomputer, it decides who will be infected': Assam minister
Assam adds 562 Covid cases, 11 more deaths
Assam: Physical classes for students of higher secondary, PG courses to start from September
Assam asked to solve technical problems in Aadhaar linkage: Giriraj Singh