Rahibai Soma Popere, a tribal farmer, has been conferred the fourth highest civilian national award Padma Shri for her contribution to agriculture. 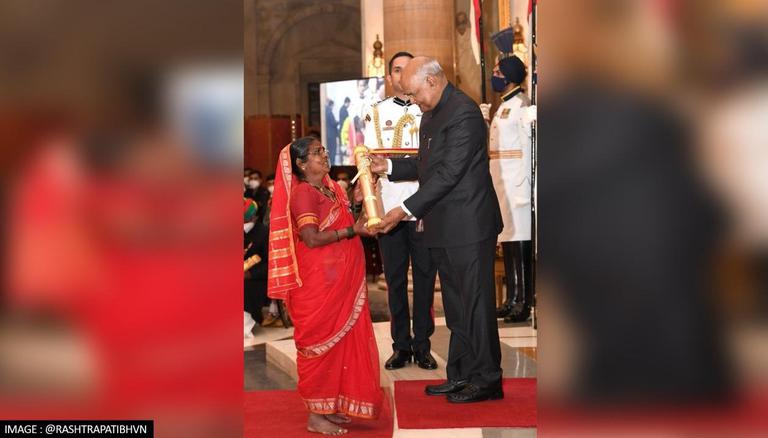 
On Monday, Rahibai Soma Popere, a tribal farmer, was conferred the fourth highest civilian national award Padma Shri from President Ram Nath Kovind for her contribution in the field of agriculture. Also known as the 'seed mother', Popere is a farmer from Mahadeo Koli, a tribal community from the Ahmednagar district of Maharashtra agriculture. She is also associated with BAIF Development Research Foundation, a national NGO involved in implementing pioneering development programs in different parts of the country.

Rahibai Soma Popere is 52 years old from the Mahadeo Koli Tribal community from Komblne village of Akole tribal block in Ahmednagar district of Maharashtra and is popularly known as SEED Mother for conserving indigenous seeds. She has worked for conserving hundreds of native varieties and encouraging farmers to grow traditional crops. She spreads awareness about organic farming, agro-biodiversity, and wild food resources. Popere's whole family was dependent on agriculture. Although she had not attended school, through practice and experience she learned about agrobiodiversity, wild food resources, and traditional culture.

Popere has started a nursery of Blackberry and distributed them as a gift to members of the Self-Help Group (SHG). She then established a nursery of hyacinth bean seedlings, rice, vegetables, beans landraces and shared them with 210 farmers in 7 villages of Akole Block. She also conserved and multiplied about 43 landraces of 17 different crops (Paddy, hyacinth bean, millets, pulses, oilseeds, etc.) by establishing an in-situ germplasm conservation centre. She has also established a perennial kitchen garden for household consumption and year-round use. At present, she is leading 5 Self Help groups in Kombhalne village and is creating awareness among women for participation in the Self Help group movement, village sanitation, clean kitchen, seed conservation, and wild food exhibitions.

A total of 119 Padma Awards are to be presented by the President this year. The list comprises seven Padma Vibhushan, 10 Padma Bhushan and 102 Padma Shri Awards. Of those 29 of the awardees are women, another 16 Posthumous awardees, and one transgender awardee.