The Income Tax Department has issued a notice to the Durga Puja committees in West Bengal asking them to pay taxes. Protesting against the move, on Tuesday, the Banga Janani wing of West Bengal's ruling Trinamool claims that the BJP is using the agencies to meddle with the traditions and culture of Bengal.

Taking to Twitter, Chief Minister Mamata Banerjee said, "The Income Tax Dept has issued notices to many committees who organise Durga pujos, asking them to pay taxes. We are proud of all our national festivals," Banerjee tweeted. The Trinamool Congress Banga Janani Wing will sit on dharna on Tuesday August 13 at Subodh Mallik Square (Opposite Hind Cinema) 10 am-6 pm," she wrote in Bengali.

Banerjee also said: "This will be a burden on the organizers. Bangla government withdrew tax, which was earlier there, on Ganga Sagar Mela. We protest and demand no taxation on Durga Pujo and Durga Pujo committees." 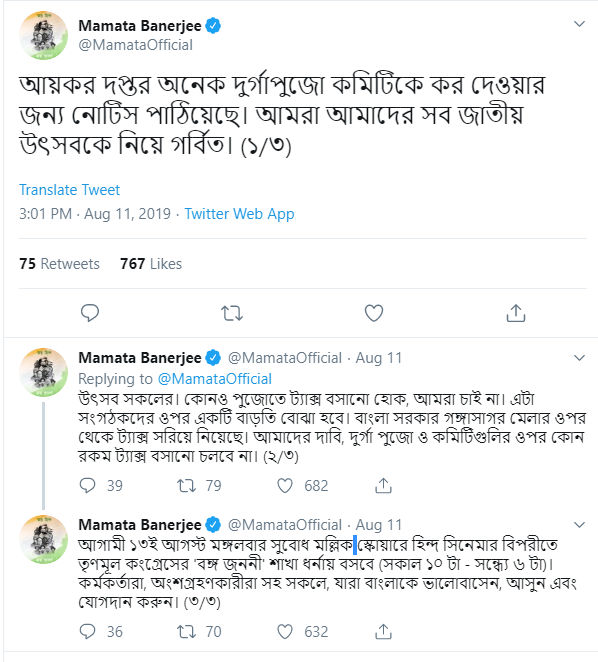 Speaking to Republic TV, TMC MP Madan Mitra said: "New gimmick or game plan by the BJP. This is a strategy to terrorise all concern, now they have targeted Durga Puja festival, somewhere they are sending ED notices, somewhere I-T, but all agencies are under Central government."

"What is the harm if IT looks into the money flow in Durga Puja committees. In some puja committees, senior TMC leaders and ministers occupy important positions and use it to launder their black money looted through cut money and chit fund scams. The TMC is afraid that this link might be revealed," BJP national secretary Rahul Sinha said.

Mocking Banerjee's "crocodile tears" for Durga Puja committees, Sinha said, if she is so concerned about these committees, then why did the TMC government on several occasions try to stop Durga Puja rituals, in order to allow Muharram in the state. "She should be the last person to talk about Durga Puja. If she is so bothered about the festival, then why did she stop idol immersions for consecutive years in order to allow Muharram processions in the state," he said.