The West Bengal government on Saturday submitted details of damages worth Rs 1.02 lakh crore caused by super cyclone Amphan to a central team, which was on a visit to the state to take stock of the ground situation. Amphan, the strongest cyclone recorded in nearly 280 years, hit the state last month and left a trail of destruction on its way and killed at least 90 people.

A seven-member central team comprising of senior officials from Ministries of Home Affairs, Agriculture, Fisheries, Road Transport, Power, Jal Shakti and Finance met West Bengal Chief Secretary Rajiva Sinha and other senior officers of the state government at the state secretariat on Saturday to be briefed on the damages caused by the cyclone. The team was handed over a copy of a report mentioning assessment of sector-wise damage in West Bengal.

According to the state's assessment, 28.56 lakh houses have been damaged by the storm accounting worth Rs 28,560 crore. Seventeen lakh hectares of farmlands including those of paddy, moon, til, jute, groundnut, sugarcane, maize and cotton have been damaged, costing Rs 15,860 crore.

Urban infrastructure in megacities like Kolkata, hit badly by Amphan, has reported loss worth Rs 6,750 crore. 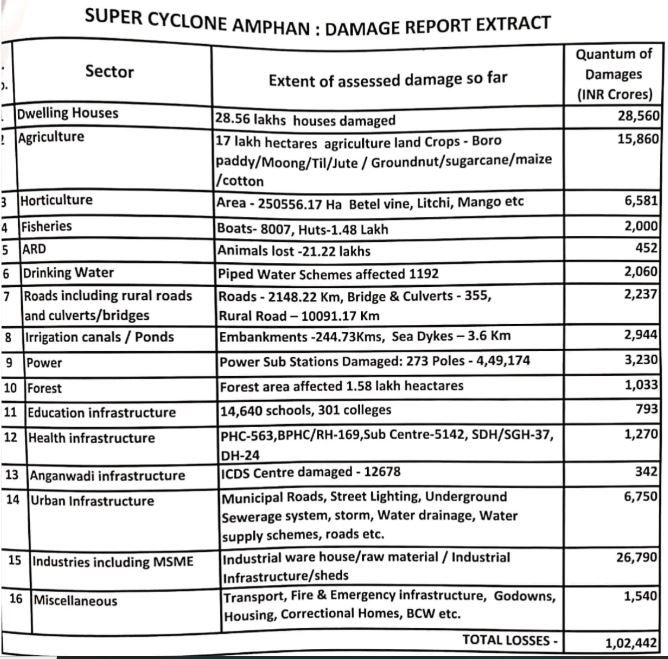 The Centre's inter-ministerial team, led by Joint Secretary (Cyber and Information Security) in the MHA, Anuj Sharma, will submit its assessment to the government, following which it may release additional funds to assist the state government to rebuild the cyclone-ravaged areas.

The Centre has provided an advance financial assistance of Rs 1,000 crore to the state for relief works, following Prime Minister Narendra Modi's announcement after he conducted an aerial survey of some cyclone-hit areas on May 22.

On the day of PM Modi's visit, Chief Minister Mamata Banerjee said the state suffered losses of more than Rs 1 lakh crore due to the cyclone and she briefed the prime minister in detail about the post-cyclone situation.