In yet another controversy in the Jawaharlal Nehru University (JNU) on Tuesday, black ink has been thrown on a newly placed campus road named V.D Savarkar Marg

In yet another controversy in the Jawaharlal Nehru University (JNU) on Tuesday, black ink has been thrown on a campus road named V.D Savarkar Marg, and a pamphlet has been pasted above it that states - "Muhammad Ali Jinnah MARG". Earlier, on Sunday night (March 15), this road sign was erected in the Purvanchal area of the campus and was named after Hindutva ideologue VD Savarkar.

READ: JNU Sedition Case: Umar Khalid says 'have faith in judiciary' after trial gets a date

In a similar controversy last year in November, amid protest in the campus on the fee-hike, a soon-to-be-unveiled statue of Swami Vivekananda was defaced and objectionable and abusive comments were written. While the JNUSU distanced itself from the act, JNU administration had said that strict action will be taken against the culprits. 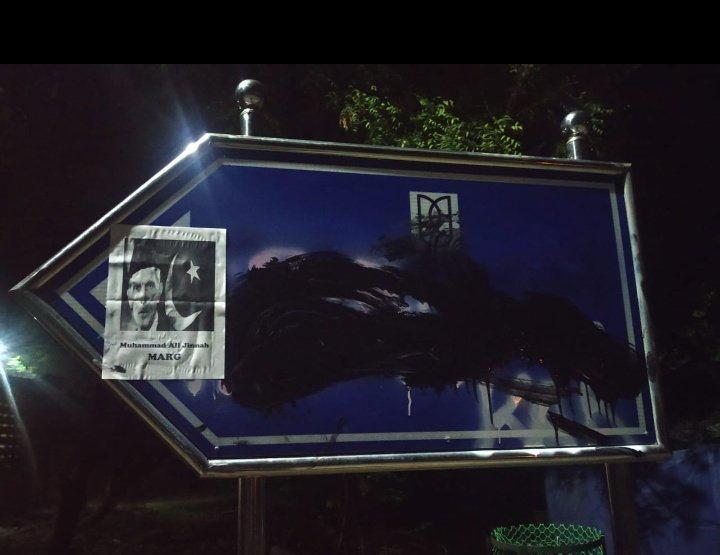 In a sharp recation to the incident, JNU Teacher's Federation has slammed the 'Anti social elements' and said that they must be punished. "First they vandalised Vivekananda statue, then Veer Savarkar. JNUTF strongly condemns such vandalism," they said in a statement released on Tuesday morning.

However, students union President Aishe Ghosh took to Twitter on Monday night and posted a picture of the same road sign with 'BR Ambedkar' scribble on it, using white spray paint. She wrote that they cannot accept 'apologists and stooges of the British' and said that one should respect the man who gave the Constitution.

We can never ever accept apologists and stooges of the British who undermined our secular fabric. Let's respect those who gave us our constitution. #NoToSavarkar pic.twitter.com/kSKGaNppX5

The overnight move to place a new road sign near Subansir Hostel irked the JNU Students Union but was lauded by the ABVP. Taking to Twitter JNU student's Union president who was also named by Delhi Police in the January 5 violence that rocked the campus, said that 'it' is a shame to the legacy of JNU'. The ABVP on the other side said that it is 'reminder of the sacrifices of Veer Savarkar'.

It's a shame to the legacy of JNU that this man's name has been put in this university.

ABVP JNU applauds and welcome the decision to rename the way to Subansir Hostel as V.D. Savarkar Marg.

May it be a reminder of the sacrifices that Veer Savarkar endured to release India from shackles of political and cultural slavery.#VDSavarkarMarg#VeerSavarkar#ABVPJNU pic.twitter.com/yNBFptLgVr