The CBI has sought cancellation of Tejashwi's bail in the case, pertaining to the alleged irregularities in granting the operational contracts of IRCTC hotels. 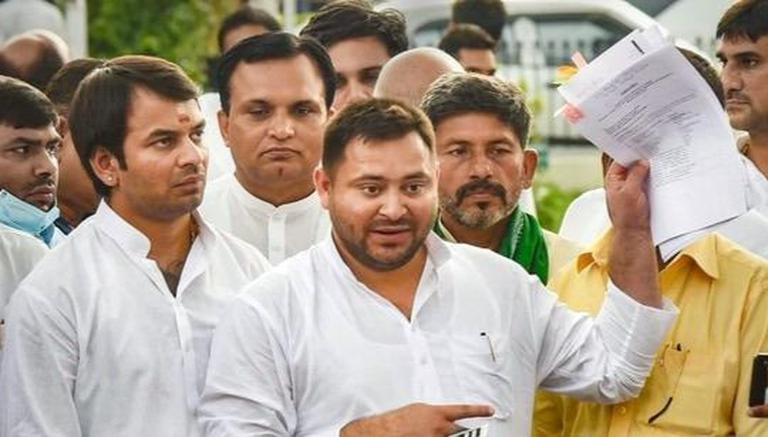 
The Central Bureau of Investigation (CBI) moved Delhi's Rouse Avenue Court against Bihar's Deputy Chief Minister and Rashtriya Janata Dal (RJD) leader Tejashwi Yadav in the Indian Railway Catering and Tourism Corporation (IRCTC) scam on Saturday. The CBI has sought the cancellation of Tejashwi's bail in the case, pertaining to the alleged irregularities in granting the operational contracts of two IRCTC hotels to a private firm.

Tejashwi, in a press briefing recently, had said, "Do CBI officials not have a mother, wife & children? Don't they have a family? Will, they always remain CBI officers? Will they not retire? Will only this party remain in power? What message do you want to send? You should honestly discharge the duty of the constitutional organization."

In its application in the Rouse Avenue Court, CBI has alleged that Tejaswi threatened CBI officials thereby influencing the case which amounts to defying bail conditions. Special Judge Geetanjali Goel, taking cognisance of the application, issued notice to Tejashwi and sought a response in the matter.

In July 2017, the CBI filed an FIR against former Railway Minister Lalu Prasad Yadav, former Bihar Chief Minister Rabri Devi, incumbent Deputy Chief Minister of state Tejashwi Yadav and 11 others in the IRCTC hotel scam. The charges in the case include criminal conspiracy (120-B), cheating (420) under IPC and corruption, the central probe agency had said.

A year thereafter, in April 2018, the agency filed a chargesheet. According to the chargesheet, a conspiracy was hatched between 2004 and 2014 in pursuance of which BNR hotels of Indian Railways, located at Puri and Ranchi, were first transferred to the IRCTC and later, for its operations, maintenance and upkeep, it was given on lease to Sujata Hotel Private Limited, which is based in Patna. It is alleged that the tender process was rigged and manipulated, and the conditions were tweaked to help the private party (Sujata Hotels).

In July 2018, a Special CBI Court took cognizance of the chargesheet, which named Lalu Yadav, Rabri Devi, Tejashwi and others as accused. The charges were, however, not framed against them, with hearings adjourned over 21 times between 2019 and 2021. In August 2022, the CBI Court approached the Delhi High Court to allow arguments on the framing of charges in the trial court. This was besides requesting the trial court to initiate arguments on the framing of charges.