In a big development after Supreme Court's recommendation, Delhi HC Justice S Muralidhar has been transferred to the Punjab and Haryana High Court as a judge

In a big development, Delhi HC Justice S. Muralidhar has been transferred to the Punjab and Haryana High Court. According to reports, President Ram Nath Kovind, after consultation with Chief Justice of India Sharad Arvind Bobde decided on the Delhi HC Justice Muralidhar's transfer and directed him to assume office.

This comes after the Supreme Court Collegium, in its meeting held on February 12 had recommended the transfer of Justice S Muralidhar to Punjab and Haryana High Court.

Meanwhile, earlier in the day on Wednesday, a high court bench headed by Justice S Muralidhar, while hearing the plea seeking safe passage for injured victims, has said that 1984 anti-Sikh riots must not repeat. The Court has also appointed Advocate Zubeda Begum as Amicus Curiae between victims and authorities. Moreover, the Court directed that District Legal Service Authorities should run 24/7 helplines. The contact numbers of helplines are to be given adequate publicity.

Justice Murlidhar said: "No, no we should never allow another 1984...especially under the watch of the Court and under your (Delhi Police) watch. We have to be very, very alert." 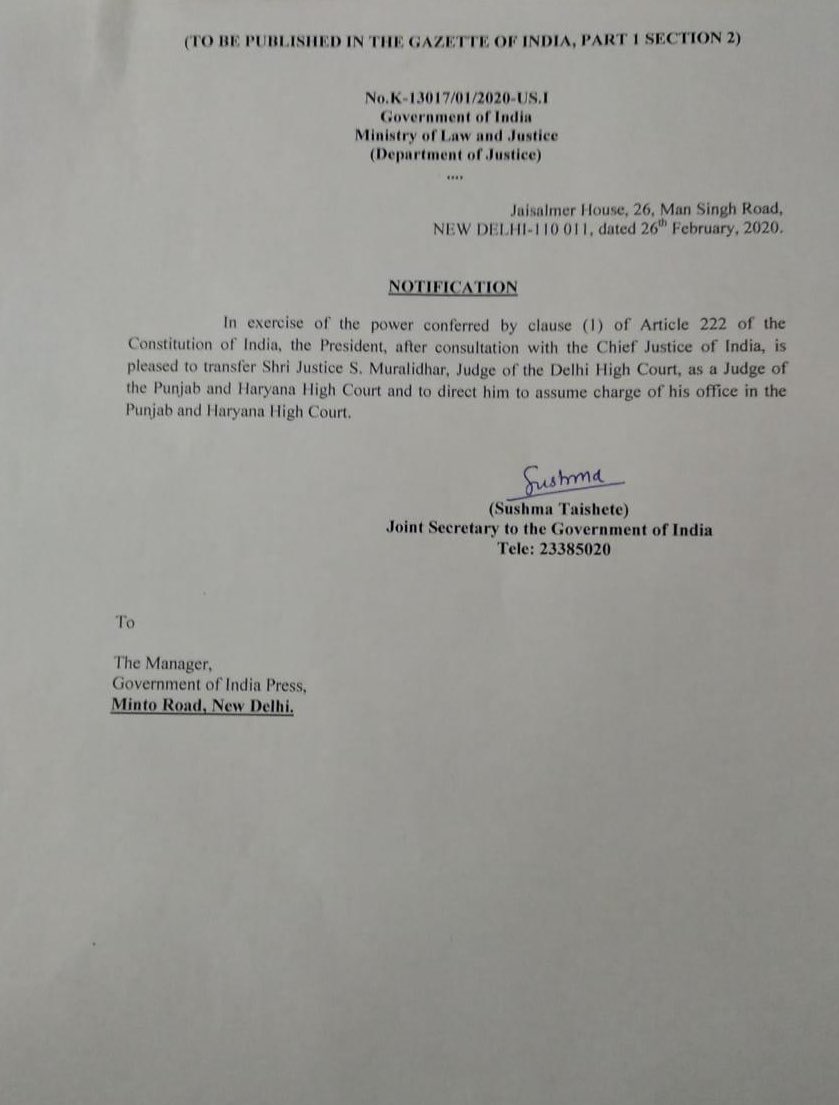 it may be noted that the Delhi High Court Bar Association (DHCBA) had on February 20 announced a strike against Muralidhar''s transfer. In a resolution, the DHCBA had expressed its "shock, dismay and outrage" at the decision to recommend the transfer of "one of the finest judges to have adorned the bench."

The resolution stated, "Such transfers are not only detrimental to our noble institution, but also tend to erode and dislodge the faith of the common litigant in the justice dispensation system. Such transfers also impede free and fair delivery of justice by the honourable bench."

After the Supreme Court's recommendation, the Delhi High Court Bar Association had resolved to abstain from work on February 20 to protest against Justice Muralidhar’s transfer. Describing him as one of the “finest” judges, the Association claimed that the SC Collegium’s move was detrimental to the institution.

The resolution mentioned that such transfers impeded free and fair delivery of justice. It expressed hope that the SC Collegium would reconsider the transfer.

Commencing his law practice in September 1984 in Chennai, Justice S Muralidhar had shifted to the national capital in 1987. Thereafter, he worked as a lawyer in many high-profile cases such as the Bhopal Gas Disaster and the Narmada displacement. Moreover, he served as the counsel for the National Human Rights Commission and the Election Commission of India. In 2003, he was awarded the PhD degree by Delhi University. His book `Law, Poverty and Legal Aid: Access to Criminal Justice' was published by LexisNexis Butterworths in August 2004. Subsequently, he was elevated as a judge of the Delhi High Court in 2006.

As a judge, he delivered many landmark verdicts such as the Hashimpura massacre case and the decriminalisation of homosexuality. He has also been at the receiving end of criticism in recent times. He had set aside the transit remand of activist Gautam Navlakha in the Bhima Koregaon - Elgar Parishad case in 2018.