A day after Muslim body filed a review petition in Ayodhya's Ram Janambhoomi-Babri Masjid land dispute judgement, Rajeev Dhavan has been sacked from the case.

A day after Muslim body filed a review petition on the Supreme Court's Ayodhya judgement, advocate for the Muslim parties, Rajeev Dhavan informed through a Facebook post that he has been removed from the counsel. The review petition has been filed by Jamiat Ulema-e-Hind on Monday. In a Facebook post on Monday morning, Dhavan said that he was informed by advocate-on-record Ejaz Maqbool (who is representing Jamiat) that he has been sacked from Babri case. Dhavan also said that he is no longer associated with the case or the review.  However, in another Facebook post, Dhavan has said that reason cited by secretary of Jamiat, Mahmood Madani is 'malicious and untrue'. 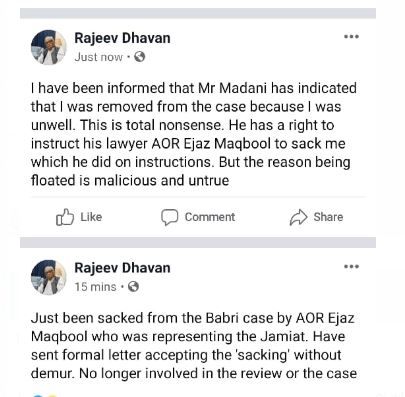 As the Ayodhya case entered the last day of hearing, in a distasteful move, senior advocate Rajeev Dhavan, who is representing the Muslim group in the case tore a book inside the courtroom. The book in question ‘Ayodhya Revisited’ was submitted to the bench by senior advocate Vikas Singh to supplement his arguments. Dhavan objected to the submission and tore the pages of the book. The bench led by Chief Justice of India Ranjan Gogoi condemning the incident stated that if the behaviour continues, they would halt the proceedings and walk out.

READ: Ayodhya Verdict: Disputed land to be given to Hindus, holds SC

Pronouncing the landmark judgment in the Ayodhya dispute case on November 9, the Supreme Court, delivered a unanimous judgment in the title suit of the disputed area awarding it to the Hindu parties for the construction of a temple. It also directed the Centre to come up with a scheme within three months to set up a trust which will hand over the outer courtyard and inner courtyard of the site for construction of a temple. Apart from this, the SC stated that an alternate land of 5 acres is to be allotted to Muslims for the liberty of constructing a mosque, either by the central govt or the State govt, in a suitable and prominent place in Ayodhya. CJI Ranjan Gogoi, while delivering the unanimous judgment, dismissed the claims of the Sunni Central Waqf Board and the Nirmohi Akhara. He also termed that the three-way division of the disputed land by the Allahabad HC in its 2010 verdict is wrong.