Senior advocate Vikas Singh was elected as the president of the Supreme Court Bar Association (SCBA), trouncing his closest opponent by a margin of 344 votes.

On Saturday, senior advocate Vikas Singh was elected as the president of the Supreme Court Bar Association, trouncing his closest opponent Dr. Adish Aggarwala by a margin of 344 votes. On the other hand, senior advocates Pradeep Kumar Rai, Ardhendumauli Kumar Prasad, and Rahul Kaushik won the polls to the post of vice president, honorary secretary, and joint secretary respectively. A total of six candidates contested for the post of president, five for vice president, five for honourary president, eight for joint secretary, four for treasurer, seven for joint secretary, 12 for senior executive member, and 47 for the post of executive member. The voting was held virtually on the National Securities Depository Limited platform from 7 am to 7 pm. 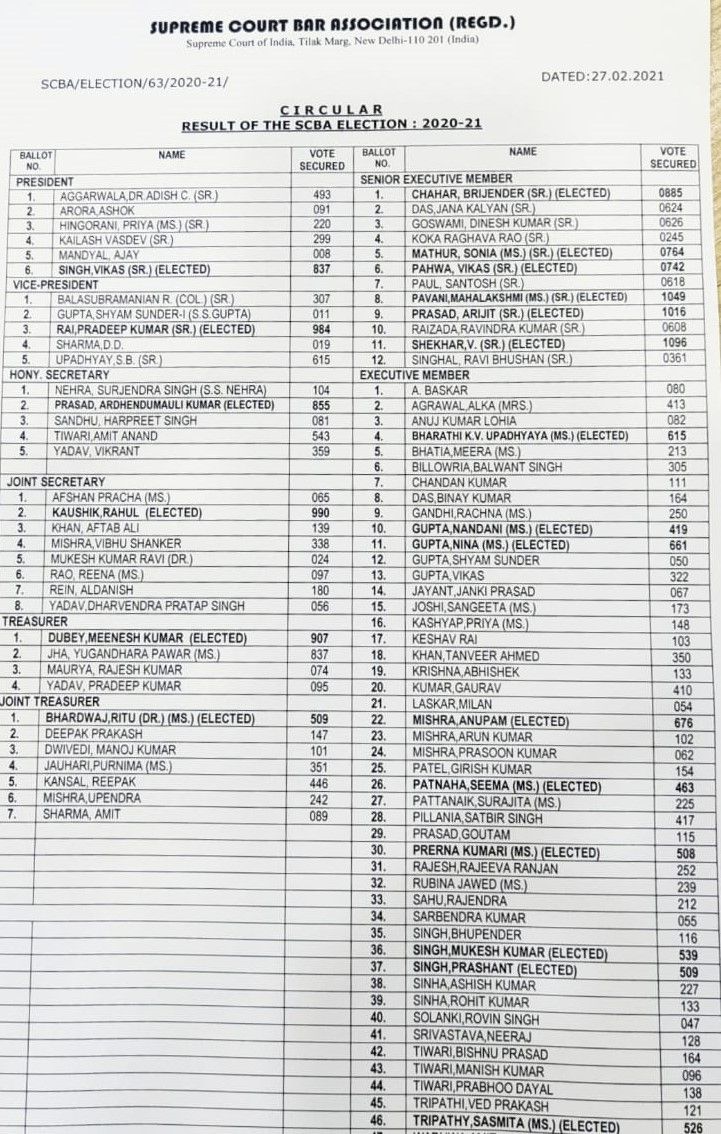 On January 14, senior advocate Dushyant Dave stepped down as the president of the SCBA. In December 2019, he emerged as the winner in the election to the post of SCBA president by securing 850 votes in contrast to senior advocate Vikas Singh who bagged 699 votes. In a letter addressed to the Executive Committee of the SCBA, Dave stated, "I feel that I have forfeited my right to continue as your leader".

Mentioning that the term of the office-bearers had already come to an end, he noted that some lawyers had expressed reservations over the decision to hold virtual polls to elect a new body. Highlighting that it is not possible to conduct the polls as per the schedule declared by the Election Committee of the association, the senior advocate said that it is morally incorrect for him to continue in his position in the present circumstances. In a parting message, Dave profusely thanked all the members of the Executive Committee for their immense contribution during the COVID-19 period.

What is the SCBA?

Some of the aims of the SCBA include the promotion of upholding rule of law, encouraging the profession in India, expressing an opinion on proposed legislation, and promotion of co-operation among advocates practicing in the court. The affairs of the association are managed by the Executive Committee comprising the President, vice president, secretary, assistant secretary, treasurer, assistant treasurer, and 15 members, of whom at least 6 shall be senior advocates. The election to the association is conducted by a three-member Election Committee nominated by the Executive Committee. The office-bearers of the SCBA are elected by secret ballot and cannot hold any office for more than two consecutive years.