Republic TV has accessed the petition filed by Sena. The 26-page petition is against the Centre and Kapil Sibbal is the advocate, while NCP Cong are parties

In the petition, Sena has urged for an urgent hearing, sighting that it will become infructuous, if not heard urgently. Shiv Sena, opposing the Governor's move, has said in the petition: "The governor erred in rejecting the request for extension of time and that in the exercise of his powers, the most the governor could have done was ordered a floor test." Shiv Sena also says that the governor overstepped his powers in stating in his report to the centre that no party was in a position to form a stable government.

Here are the important pages of the petition: 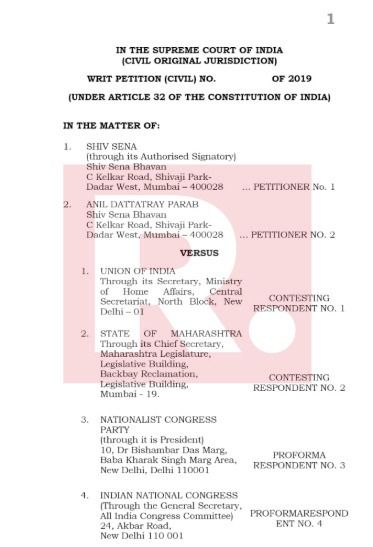 Issuing a press statement confirming the recommendation of a president's rule in Maharashtra, the Governor of Maharashtra on Tuesday, set the record straight as NCP denied any such recommendation. In the statement, Governor Bhagat Singh Koshyari has said that he was satisfied that the govt of the State of  Maharashtra cannot be carried on in accordance with the Constitution. Hence, the governor had submitted a report as contemplated by the provisions of Art. 356 of the Constitution.

Earlier in the day, NCP has agreed to give the Chief Minister's post to Shiv Sena, but is waiting for Congress's decision on the same, sources said. Minutes after NCP put the onus on Congress to discuss the future course of government formation in Maharashtra, Congress has now said that the delay is from NCP's chief Sharad Pawar, as per sources. Meanwhile, Congres leaders Malikarjun Kharge, Ahmed Patel and KC Venugopal will meet NCP chief Pawar on Tuesday, to take the final call.

In a minute-by-minute changing dynamics of Maharashtra politics, Governor of Maharashtra on Monday night invited the third-largest party - NCP to form the government after Shiv Sena failed to provide the majority number. The governor also rejected Sena's request for an extension of the deadline. Congress leader KC Venugopal on Monday evening said that Congress is still discussing the formation of a government with the NCP and has to extended Outer support to the Shiv Sena. This official declaration came even as Shiv Sena reached its deadline of 7.30 PM to form the government in Maharashtra. The NCP, on the other hand, placed the onus of decision-making on Congress, saying they will take the decision only after Congress decides. After BJP on Sunday announced that it wouldn't form government, Governor had invited the second largest party - Shiv Sena to form the government. Meanwhile, Shiv Sena MP Arvind Sawant also resigned from Prime Minister Narendra Modi's cabinet.

The stalemate in the state is a result of the fallout of the Mahayuti alliance partners- BJP and Shiv Sena over the post of Chief Minister in the state. While both blamed each other of betraying people's mandate, BJP made it clear to the governor that it would not form government as Sena does not wish to negotiate. In the assembly polls, the Mahayuti alliance partners won a total of 161 seats - BJP won 105 seats and Shiv Sena won 56 seats. The Mahagadhi made a comeback bagging 98 seats - (NCP 54 seats and Congress 44 seats.)