The BJP on Monday issued a three-line whip to all its Rajya Sabha members, asking them to be present in the House on Tuesday and "support the stand of the govt"

The BJP on Monday issued a three-line whip to all its Rajya Sabha members, asking them to be present in the House on Tuesday to "support the stand of the government".

BJP's letter also states that "All BJP MPs of Rajya Sabha are informed that some very important Legislative work will be brought to the House on Tuesday, 11th February 2020, to be discussed and to be passed"

Finance Minister Nirmala Sitharaman will reply in the House on Budget 2020 at 4 pm tomorrow. Earlier, it was announced that there would be no lunch break in the upper House on Tuesday.  The first part of Parliament's Budget Session will conclude on Tuesday. Parliament will resume from March 2 after a recess.

Here's a list of bills expected to be tabled: 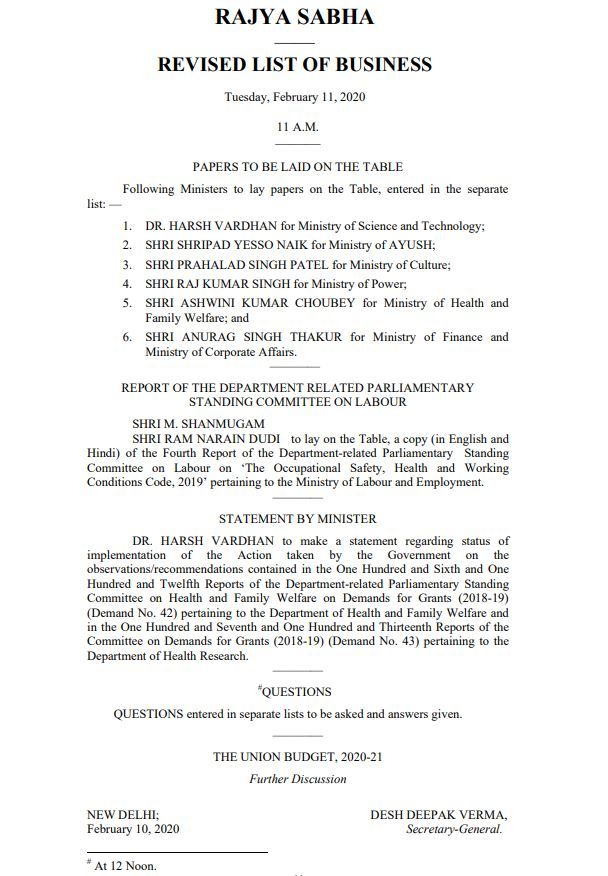 Subsequent to the Budget speech, the other notable occurrences in Parliament were the Prime Minister's announcement of the formation of a Ram Mandir trust, his speeches in both house in reply to the motion of thanks for the President's address, and an outrageous scuffle that broke out when the BJP raised Rahul Gandhi's election rally 'danda' attack at the Prime Minister.

Another significant mention was External Affairs Minister S Jaishankar confirming that India had offered to rescue Pakistani students stranded in Coronavirus-hit Wuhan. This came after India successfully managed to rescue its own nationals from Wuhan aboard two Air India flights, with them all testing negative for Coronavirus upon landing. On Monday, Health Minister Harsh Vardhan addressed the house on the Coronavirus.