While interacting with a news agency on Sunday, the NCP leader said," The budget of the Modi government was more like a game of snakes and ladders. It has created an overall confusion among the people and ultimately people will have to pay more tax."

He also took to his official Twitter handle and explained his comparison of the union budget to the game of 'snakes and ladders.'

This 7th Budget of the #Modi led #NDA government presented by Finance Minister Ms.@nsitharaman is like the board game called 'Snakes and Ladders'. Citizens of our country will never know, when they will go up or come tumbling down.#Budget2020

Earlier on Saturday, NCP supremo Sharad Pawar and Lok Sabha MP Supriya Sule had criticised the budget and has stated that it lacked 'direction.'

Taking to Twitter, Supriya Sule had said, " Whilst the FM was speaking the Sensex was down close to 700 points, which gives a clear indication that nowhere in the speech was there anything of substance, and the market reaction was a rejection of the budget proposals."

Adding further she also called out the government for proposing part disinvestment of the LIC. 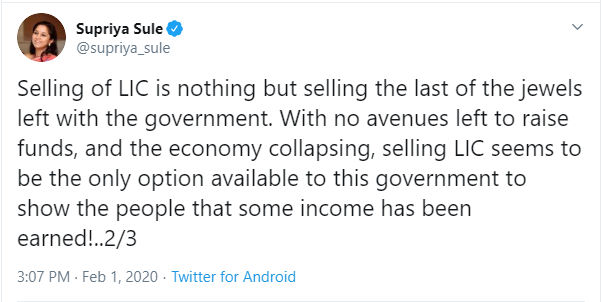 She also stated that soon the government will not have anything to sell or disinvest.

Taking to Twitter, NCP supremo Sharad Pawar had stated that even if the budget focusses on agricultural warehousing, it lacks vision and clarity when it comes to doubling the income of the farmers.

Budget focuses on Agriculture Warehousing but lacks vision and clarity on Doubling Farmers' income. It is still a distant dream.

Sitharaman commenced the budget speech by stressing that this was a budget to boost the income and enhance purchasing power. She noted that the fundamentals of the economy were strong, inflation had been contained, banks had been cleaned up and formalization of the economy had taken place during the NDA government’s first term in office. Moreover, she talked about the positive impact after the introduction of GST and paid homage to the late Arun Jaitley for his invaluable contribution.

Thereafter, she listed the success of government schemes such as PMAY, Ayushmann Bharat, financial inclusion, etc. After this, she dedicated her speech to elaborate on the three prominent themes of the budget- aspirational India, economic development and caring society.