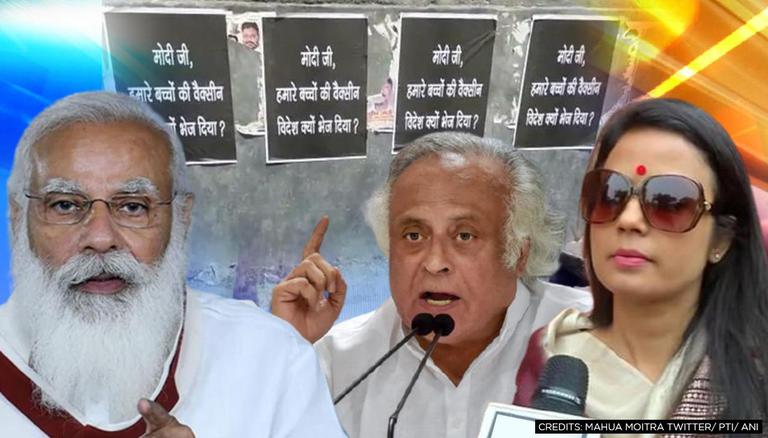 
Lashing out at Delhi police's arrest over anti-Modi posters, Opposition leaders questioned why 24 people were arrested for simply putting up posters questioning Centre's vaccine exports. Opposition MPs like Mahua Moitra, P Chidambaram, Jairam Ramesh and Abhishek Manu Singhvi condemned the arrests claiming it smacked of 'lawless state gone amuck'. Ramesh further challenged police to arrest as he will be putting up anti-Modi and anti-Shah posters on his compound.

Celebrate, India is a free country. There is freedom of speech

Except, when you ask a question of the Honourable Prime Minister

12 Arrested Over Posters Against PM Modi In Delhi

Am shocked &stunned. May vehemently disagree bt under what authority, what law, wht power can U arrest those who put up posters eg auto driver, printer, daily wager etc. This, like UP arrest of person who complained on losing his father, smacks of a lawless state gone amuck!

24 arrested over anti-Modi posters in Delhi

On Saturday, Delhi Police has registered 17 FIRs and arrested 24 people  for allegedly pasting posters critical of Prime Minister Narendra Modi in connection with the vaccination drive against COVID-19, officials said. The posters reading "Modiji humare bachon ki vaccine videsh kyu bhej diya (PM why did you send vaccines of our children to foreign countries?)" were pasted in several parts of the city, they said.  More than 800 posters and banners were recovered across Delhi. The arrests include an auto-rickshaw driver, printer, sales agent etc, as per reports.

The FIRs were registered under sections 188 (disobedience to order duly promulgated by public servant) of the Indian Penal Code and other relevant sections including section 3 of the Prevention of Defacement of Property Act across various districts of the Delhi Police, the officials said. A senior police officer said, "More FIRs are likely to be registered if further complaints are received in this regard. As of now, investigation is underway to ascertain as to on whose behalf these posters were being put up at various places across the city and accordingly further action will be taken in the matter". One of the arrested claimed that he was given Rs 500 to paste these posters and police are trying to nab more based on  CCTV footage of the incidents.

Incidentally, on April 30, an SC-bench comprising of Justices DY Chandrachud, L Nageswara Rao and Ravindra Bhat ruled that there should be a free flow of information and voices of citizens should be heard. The apex court ruled that there should not be any presumption that grievances raised on the internet by citizens are false. "We don't want any clampdown of information. We will treat it as a contempt of court if such grievances are considered for action," Justice Chandrachud said.