Congress leader Rahul Gandhi who is in Jammu and Kashmir on a two-day visit has demanded the restoration of full statehood for the Union Territory. 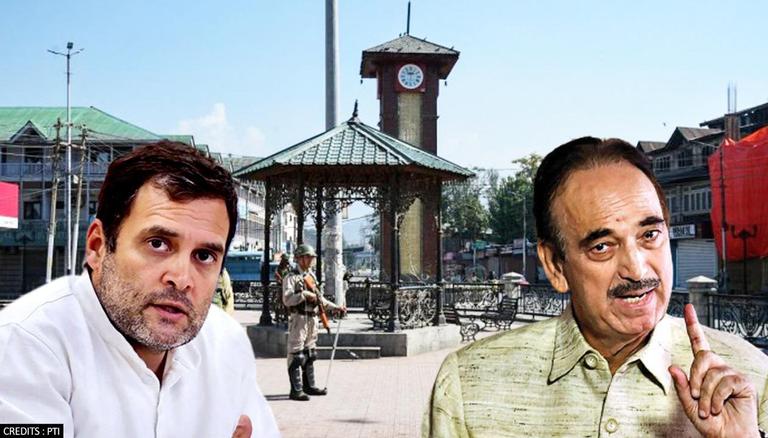 INC demands restoration of statehood for Jammu and Kashmir

We demand the restoration of full statehood for Jammu and Kashmir and free and fair elections here: Congress leader Rahul Gandhi addressing party workers in Srinagar

He is on a two-day visit to the Union Territory pic.twitter.com/80JKzEsSgX

Earlier, the Congress leader visited the Kheer Bhawani temple in the Ganderbal district of Jammu and Kashmir, officials said.   Gandhi, who arrived on a two-day visit to Jammu and Kashmir on Monday, reached the temple nestled among mighty chinars in the Tullamulla area of the central Kashmir district early in the morning, a Congress leader said.  He said Gandhi was accompanied by the party's general secretary organisation and, KC Venugopal to the famous Ragnya Devi temple popularly known as Kheer Bhawani.

Meanwhile, speaking to reporters outside the Kheer Bhawani temple complex, Senior Congress leader Ghulam Nabi Azad also demanded a full restoration of statehood for J&K before assembly elections. In addition, the former Chief Minister of the erstwhile state also urged that Kashmiri Pandits who left the valley in the early 1990s should be brought back. Moreover, Azad also demanded land and job rights.

"The elections...should be conducted soon. But before the elections, the statehood should be restored, which is very important. Kashmiri Pandits should be brought back," said Ghulam Nabi Azad

"Our land and job (rights), which were taken away after Article 370 was revoked, should be secured like they were before (August 5, 2019) through a new law when the statehood is restored," he said.

PDP advocates for 'self-rule' for Jammu and Kashmir

Meanwhile, Congress ally and Gupkar Alliance constituent PDP on Monday sparked a row and reiterated that the idea of 'self-rule' for Jammu & Kashmir. PDP chief Mehbooba Mufti chaired a meeting of PDP youth leaders from all districts of the Kashmir Valley. Mufti asserted that 'self-rule' would prove to be an effective solution for ensuring peace in J&K. In addition, she also stated that self-rule will address the internal and external dimensions of the problem without compromising the sovereignty of India and Pakistan.