In a statement that has significantly irked Maha Vikas Aghadi ally Congress, Shiv Sena MP Sanjay Raut on Wednesday claimed that former Prime Minister Indira Gandhi met with underworld don Karim Lala. Singhvi took a dig at the Saamana editor asking him how he makes such comments without doing "saamna with the rich history of his own party?" implying that Shiv Sena had underworld links.

Deora, on the other hand, was softer at his approach and stated that political leaders must "show restraint" when it comes to talking about deceased Prime Ministers. 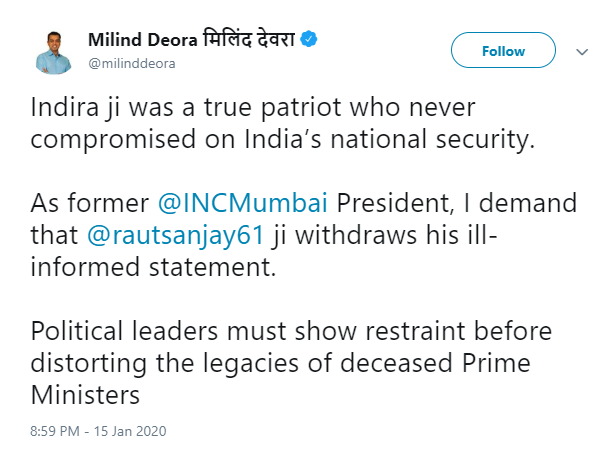 Sanjay Raut had passed this controversial comment against Indira Gandhi while giving a talk to a local Marathi News Agency. Talking about the past influence of the underworld over Mumbai, he claimed that the underworld decided who will be the city's commissioner and in the state secretariat. Moreover, he claimed that the entire secretariat would meet don Haji Mastan when he was in town.

"They (underworld) used to decide who will be Mumbai's police commissioner and who will sit in Mantralaya (state secretariat)," Raut said. He added, "When (underworld don) Haji Mastan came to Mantralaya, the entire secretariat would come down to see him. Indira Gandhi used to meet Karim Lala in Pydhonie (in south Mumbai)".

This comment comes amidst discontent among the Sena-NCP-Congress after the expansion of the Maharashtra cabinet with Sena MP Sanjay Raut reportedly unhappy as his brother Sunil Raut missed out on a Cabinet berth.

Congress lashes out at Raut