In the four-page letter, Swamy has stated that the 'Rama Setu' (located in the south-eastern coast of Tamil Nadu extending towards Sri Lanka) should be declared a National Heritage Monument under the 1958 act, as the 'Setu' - (chain of limestone shoals between Rameshwaram and Mannar) satisfies all criteria.

Asking the PMO to declare Ram Setu as a national heritage and the building of the Ram temple at Ayodhya, BJP leader Dr.Subramanian Swamy, on Sunday has released a letter he had written dated May 30.

In the four-page letter, Swamy has stated that the 'Rama Setu' (located in the south-eastern coast of Tamil Nadu extending towards Sri Lanka) should be declared a National Heritage Monument under the 1958 act, as the 'Setu' - (chain of limestone shoals between Rameshwaram and Mannar) satisfies all criteria.

"Rama Setu (should) be declared a National Heritage Monument under the Ancient Monuments and Archeological Sites and Remains Act, 1958. The Rama Setu satisfies all the criteria laid down in the Act for such a declaration," he wrote in the letter.

Describing his battle with the Madras High Court and the Supreme Court for stalling the Setu Samundaram Ship Channel Project with the Centre agreeing to explore an alternative route for the project he has written that after PM Modi's election (2014), the matter has been raised and cleared by Ministry of Culture but has not been approved by the cabinet.

"The issue was cleared by the Ministry of Culture but did not come up for approval at the Cabinet level for whatever reason. My request to you is that the Union of India Counsels in the Supreme Court be directed to make a statement that the Government has agreed to recognize the Rama Setu as a National Heritage Monument," he added.

Supreme Court Extends Time For The Ayodhya Mediation. Gives The 3-member Panel Time Till 15 August To Complete The Process

Referring to Article 300A, Swamy has stated that the Union Government has the right to take over anybody's land in public interest and has requested the Government to assure the Supreme Court that just compensation will be given to all parties in the 'Ramjanmabhoomi - Babri Masjid land dispute' and allocate the 'disputed' land for building the Ram Temple.

"There is no bar in the law which stands in the way of the Government of India allocating the 67.72 acres of land in Ayodhya to anybody which has a public character for building the Ram Temple. The government can inform the Supreme Court that compensation, as decided by the Court, will be paid to the winning Appellate," he stated.

He also has added that he had enclosed a copy of the submissions he had made to the Mediation Committee regarding the same as a party to the dispute.

Here is the entire letter: 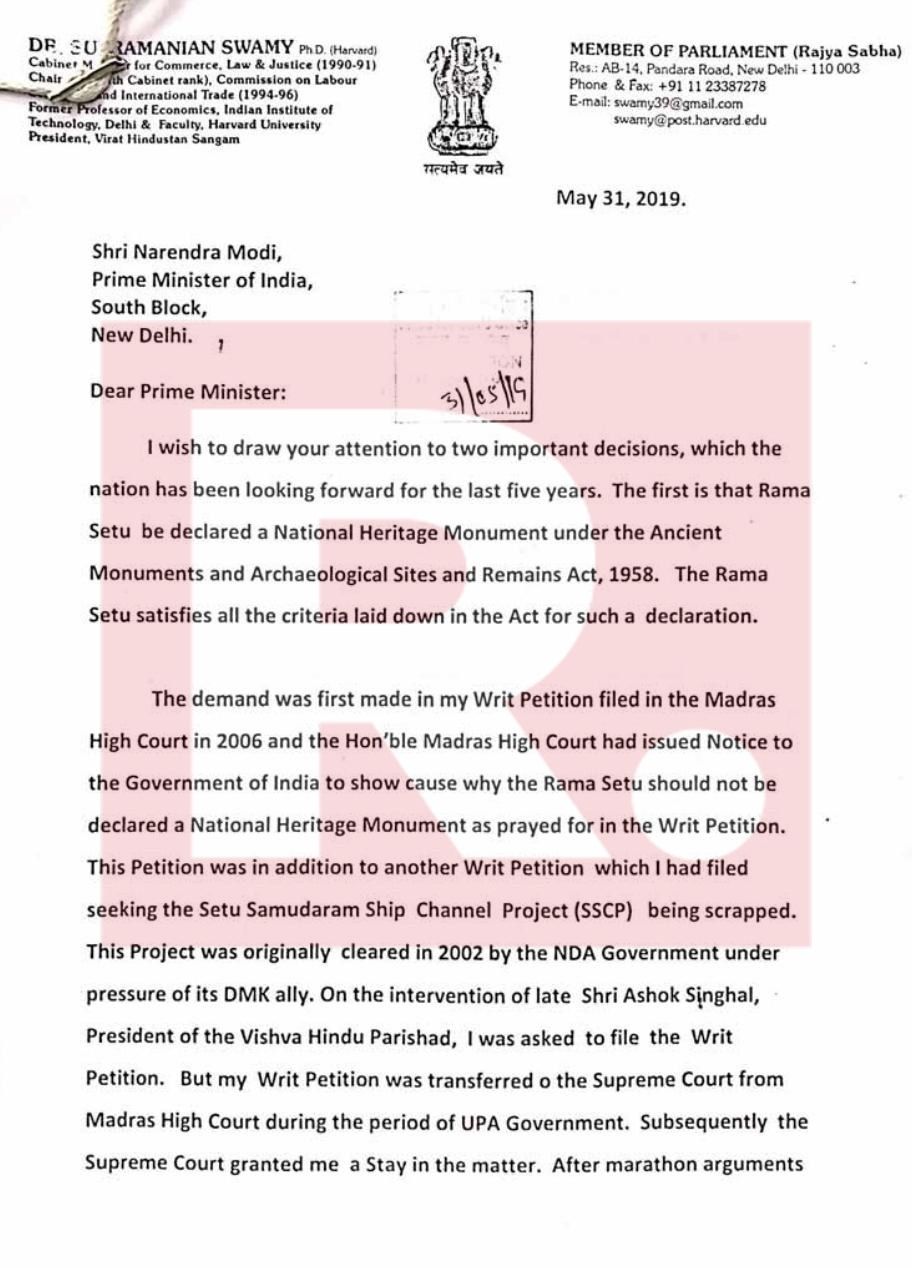 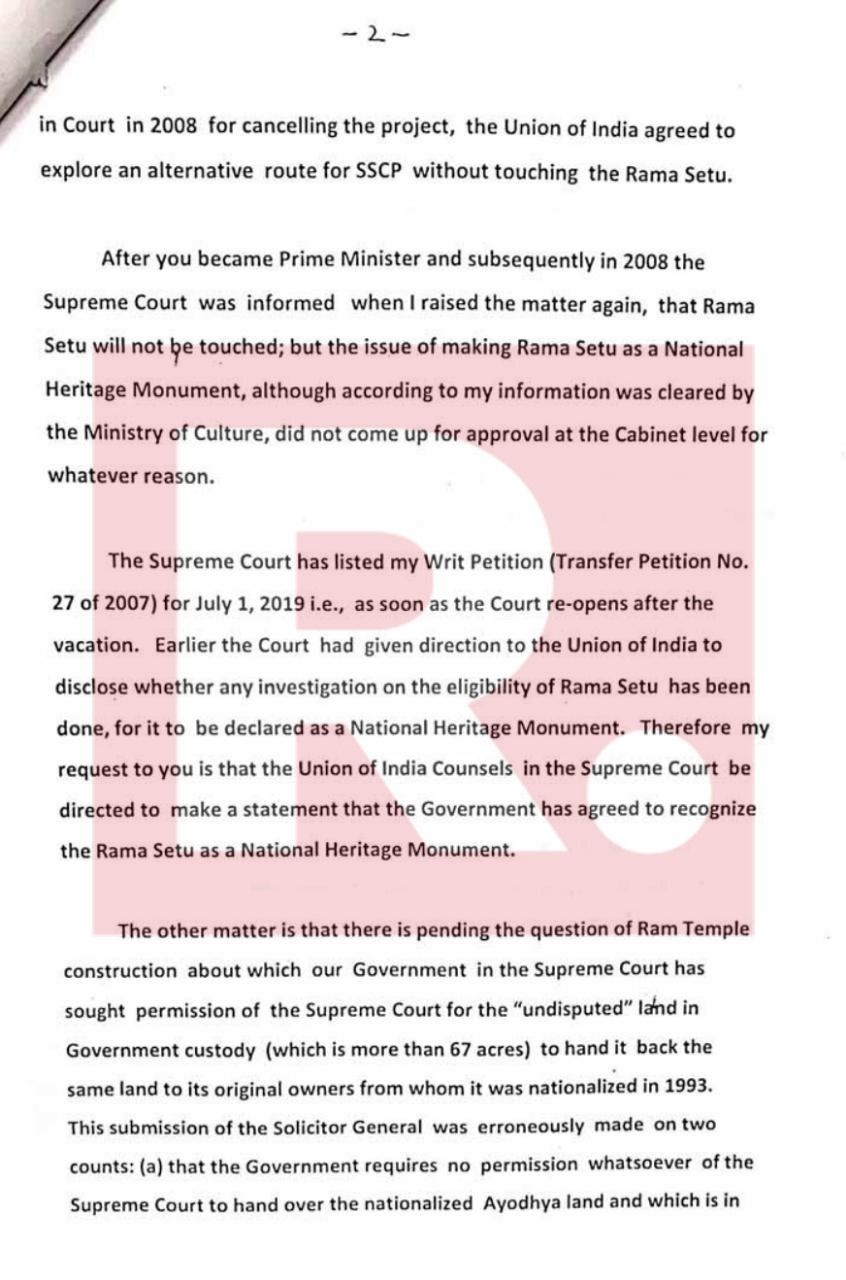 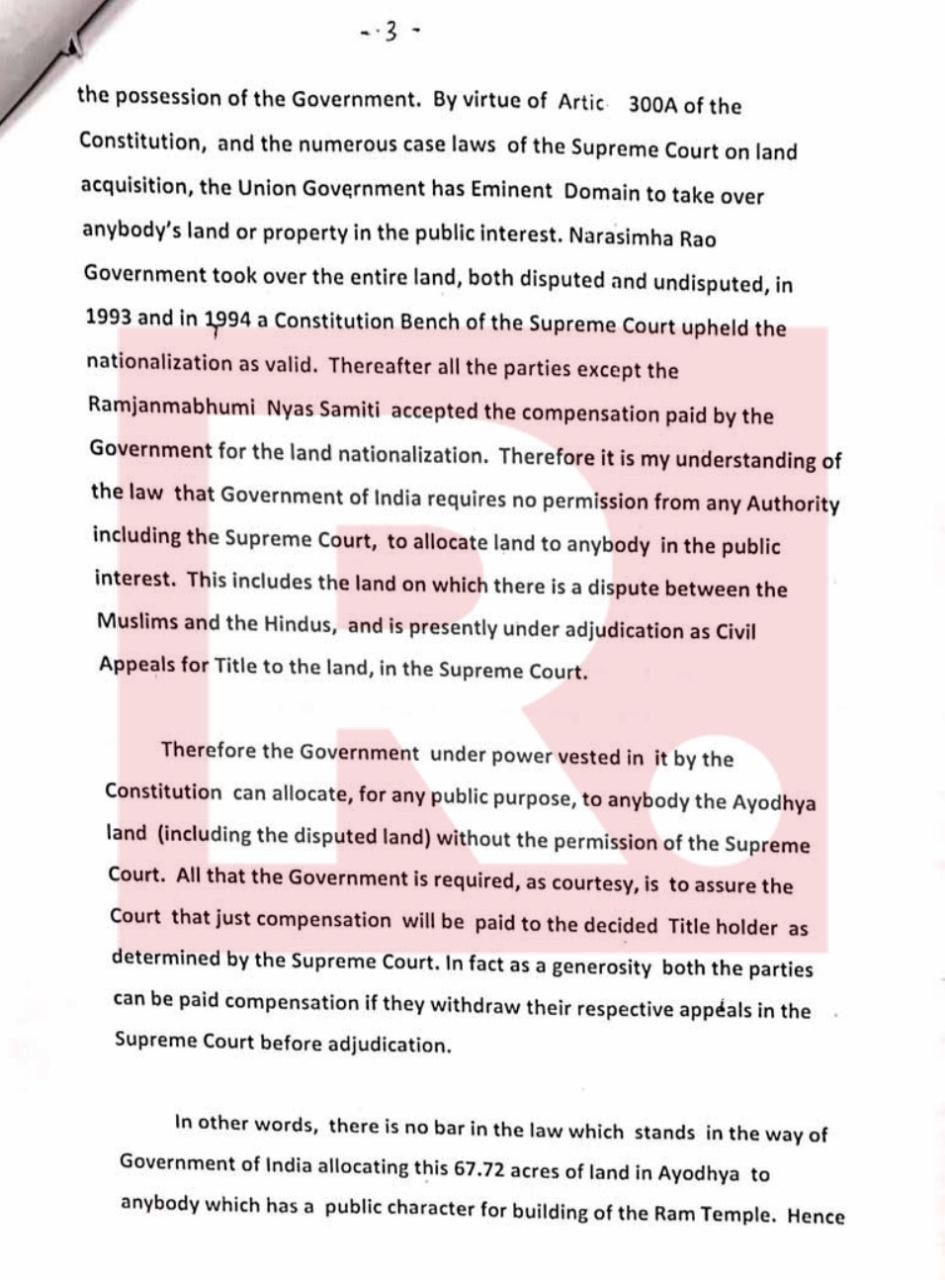 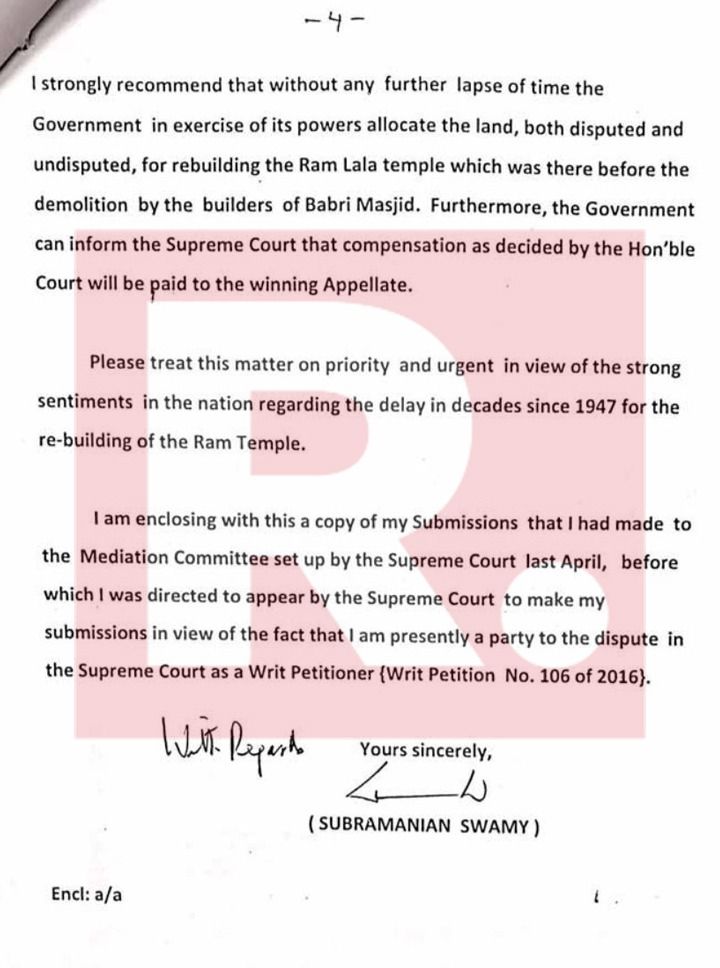 Currently, the three-member mediation panel appointed by the Supreme Court for the Ayodhya dispute case is discussing the matters with the affected parties and has been directed by a  five-judge Constitution bench to submit its report on August 15.