After BJP leaders' statements followed by multiple shooting incidents, Cong leader Digvijay Singh alleged that the country is being pushed towards a Civil War

Reacting to the alleged firing incident outside gate no. 7 of the Jamia Millia Islamia on February 2, Congress leader Digvijay Singh listed out the chronology of the incidents after MoS Finance and BJP leader Anurag Thakur's ‘Gun down traitors’ remark and Uttar Pradesh Chief Minister Yogi Adityanath's stern warning of 'anybody causing unrest in Kanwar yatra will be met with bullets and not dialogues'. The Congress leader slammed Delhi police for 'inaction' on the multiple shooting incidents and alleged that the country is being pushed towards a Civil War.

"Every step is going on the basis of Chronology. First Anurag Thakur then Gopal then Aditya Nath and now Kapil Gujar. Delhi Police becoming a mute spectator. Police Commissioner has also got the extension. Are we being pushed towards civil war?", tweeted Digvijay Singh. 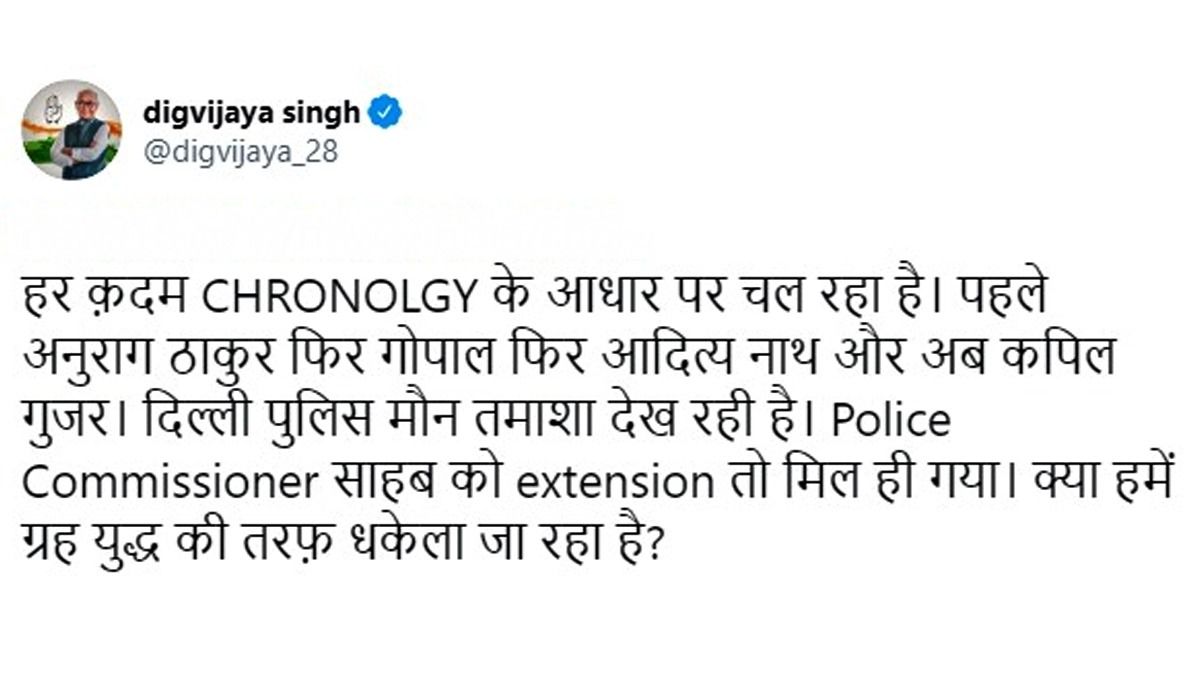 The nation has witnessed a series of protests concerning the CAA, NPR and the proposed NRC in several places across the country which magnified in prominent universities such as JNU, Jamia Millia Islamia University and Aligarh Muslim university resulting in vandalism, rioting, damaging public property and stone-pelting by protestors, leading to retaliatory action by police personnel. Both the protestors and the police personnel suffered injuries in violent protests.

The Shaheen Bagh protest blocking an important road for over one and a half month in Delhi has caused massive inconvenience and delay to civilians in transit, emergency services such as ambulance and fire brigade. Opposition leaders from AAP and Congress leaders such as Mani Shankar Aiyar a day after returning from his visit to Pakistan has supported Shaheen Bagh protest. Hitting back at the Congress and oppositions' support to the protest, the BJP leaders such as Anurag Thakur and Parvesh Verma have slammed the protests with inciting speeches and statements in poll-bound Delhi, followed by multiple shooting incidents on protestors, twice in Jamia and once in Shaheen Bagh, making the political situation vicious and intense.

READ | Committees To Be Formed In All UP Districts To Launch Protests Against CAA, Say Social, Minority Bodies

What are the protests for?

The CAA law grants citizenship to persecuted minorities such as Hindu, Sikh, Christian, Jain, Buddhist, Parsi refugees who have escaped persecution from Bangladesh, Pakistan and Afghanistan and have taken refuge in India since or before December 31 2014. With no mention of Muslims in the CAA law, a section of the Muslim community seemingly feels threatened alleging that government plans to systematically detain or oust the Indian Muslims despite the government's repeated assurance that no Indian citizen will be ousted as the law is about giving citizenship to persecuted minorities and not about snatching away citizenship.

Protestors have raised questions on the exclusion of the Muslim refugees in the law. Center in its defense has said that Muslims are in majority in Bangladesh, Pakistan and Afghanistan and are not persecuted in these countries as against the plight of the minorities which is much worse. Also, the center stated that leaders during the times of independence and partition such as Mahatma Gandhi and Jawaharlal Nehru had promised the minorities that India would accept them if they wish to come back since they were the victims of partition whereas a section of Muslim community willingly chose to make a separate Muslim dominated nation which is today's Pakistan hence the Muslims need not come back to India as it was their decision to go to Pakistan. The center reiterated that the CAA law is a fulfillment of the long-awaited promise made by Mahatma Gandhi and several such leaders of those times.

READ | Opposition Set To Corner Govt In Parliament Over CAA, NPR And NRC

READ | Anti-CAA Resolution To Be Moved In Puducherry Assembly On Feb 12: CM