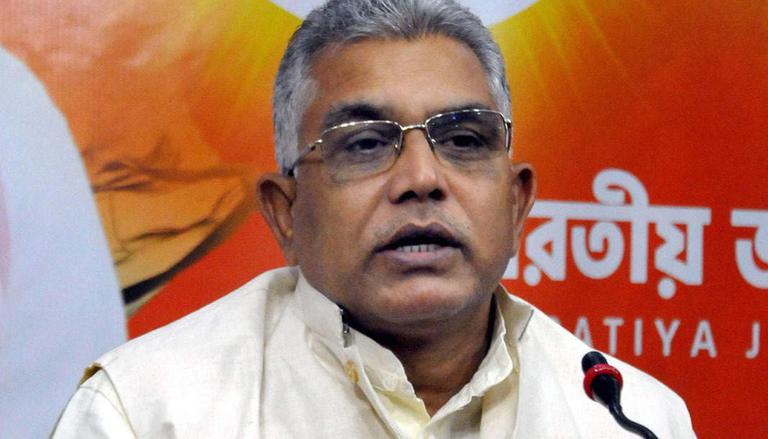 
West Bengal Bharatiya Janata Party president Dilip Ghosh on Sunday slammed Chief Minister Mamata Banerjee-led government for allegedly targeting people who switch sides to joining the BJP. Ghosh claimed that the Trinamool Congress (TMC) government was arresting people on accounts of joining BJP after leaving the TMC. The BJP leader, who has been critical of the Mamata government, stated that the TMC understands "nothing apart from politics".

Ghosh was speaking to reporters when he made claims that people were being arrested for joining BJP from TMC. The leader went on to call the state government a "disaster". Ghosh said, "Duare sarkar has now turned into biporjoyer sarkar (government of disaster). This government understands nothing apart from politics. There are allegations of scams against many people. They should be punished after investigation, no matter which party they belong to. In Narada and Sarada CBI inquiry is underway. There will be a CBI inquiry of post-poll violence. There should be justice for any crime."

Earlier on Sunday, former West Bengal Minister and BJP leader Shyama Prasad Mukherjee was arrested for allegedly misappropriating government funds while he was posted as chairman in Bishnupur Municipality. When enquired if the arrest had any political conspiracy behind it, Ghosh replied, " I do not know. Cases are being made against many people today. When they were in the TMC, there was no arrest. But when they joined BJP, they are being arrested.”

Shyama Prasad Mukherjee, who had joined the BJP ahead of this year's assembly elections was arrested for alleged mismanagement of government funds. According to the state police, the leader was involved in financial irregularities of nearly Rs 10 crore. "An investigation was carried out by the SDPO, Bishnupur into the allegations of financial irregularities of Rs 9.91 crore. Mukherjee was arrested after he failed to give satisfactory answers to queries," Bankura SP Dhritiman Sarkar told PTI.

The former Trinamool Congress MLA from Bishnupur was apprehended and produced before Bishnupur court. He is currently under four days of police custody. Mukherjee has also served as the textile minister in the Trinamool Congress-led state government.