Weeks after Milind Deora resigned as Mumbai Congress chief, senior leader Eknath Gaikwad has been appointed as the acting president of MRCC by KC Venugopal

Weeks after Milind Deora resigned as the Mumbai Congress president, AICC General Secretary KC Venugopal on Friday appointed senior leader Eknath Gaikwad as the acting president of MRCC (Mumbai Regional Congress Committee). In a statement released by Congress, it has been stated the party appreciates the contributions made by the outgoing president Milind Deora, who had resigned from the post stating that he was looking forward to playing a role at the national level to help stabilise the party. 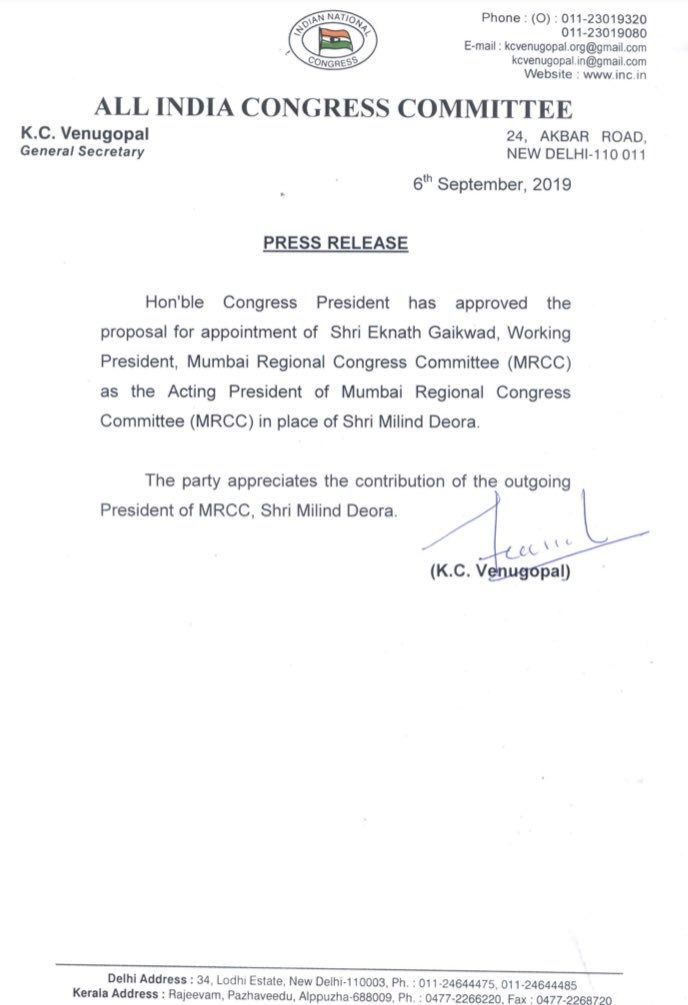 Who is Eknath Gaikwad?

Newly-appointed Mumbai Congress chief, Eknath Gaikwad had represented the Mumbai-South Central constituency in 2014 General elections, but lost the seat to Shiv Sena's Rahul Shewale. A three-time member of Legislative Assembly from Dharavi and two-time state minister in the Maharashtra Cabinet, Eknath Gaikwad has taken over the post of acting Mumbai Congress president.

Senior Congress leader Sanjay Nirupam had slammed his successor Deora after he announced his resignation. Milind Deora was appointed as the Mumbai Congress chief amid the General Elections 2019, and he had contested the polls from Mumbai-South constituency against Shiv Sena's Arvind Sawant. However, on May 23 when the results were announced, Deora lost to Arvind Sawant. Milind Deora had earlier recommended setting up of a provisional collective leadership which comprised three senior Congress leaders to oversee the city party unit till the Maharashtra Assembly polls. Elections in the state are due by the end of the year.

Amid the confusions and back-and-forth of the Congress party over its president following the resignation of Rahul Gandhi from his post, AICC appointed Sonia Gandhi as the interim president in August. AICC General Secretary KC Venugopal had stated that the CWC unanimously wanted to Rahul Gandhi to work as the party's chief but since he declined they requested Sonia Gandhi to take over until the new president was elected. Meanwhile, a meeting of all All India Congress Committee (AICC) General Secretaries, State In-charges & leaders of State Legislature Parties has been called by Congress interim president Sonia Gandhi in Delhi on September 12.