An FIR has been filed against Congress leader Pankaj Punia by the Lucknow police for an abusive tweet that he had put out earlier criticising the UP Government's management of the migrant crisis by using derogatory terms against the Uttar Pradesh Chief Minister. This comes in response to the tussle between the UP government and Priyanka Gandhi Vadra over the 1000 buses that the Congress party had allegedly arranged out of which some are awaiting permission at UP-Delhi border in Ghaziabad.

In a now-deleted tweet, the Congress leader had stated, "The Congress only wanted to do was help the migrant workers to reach their home and pay for them. But the government started engaging in politics. Such lowly acts are only done by saffron-clad 'sanghis'", Punia tweeted in Hindi. 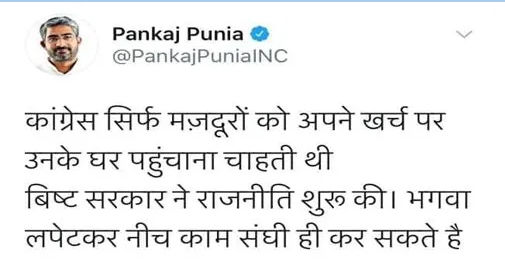 After receiving massive backlash, the Congress leader deleted his tweet soon after which a criminal complaint was filed against him for his 'malicious' language. The copy of the complaint reads, "The accused has not only used derogatory and defamatory language against the Respected Chief Minister of UP, but he has also deliberately published the aforesaid Tweet solely for the purpose of insulting and outraging religious sentiments of the members of Hindu community and to promote disharmony, enmity, hatred and ill will between different religious groups and also to provoke breach of peace and to severally insult the religious beliefs of Hindus”.

Priyanka Gandhi Vadra had arranged 1000 buses to transport migrants walking towards UP, which was accepted by the Yogi government. But after demanding details of the buses and drivers, UP Deputy CM Dinesh Sharma stated that of the 1000 buses -297 buses did not have fitness certificates, 98 were three-wheelers, cars & ambulances and 68 vehicles did not have any papers. Congress rebel MLA Aditi Singh too has slammed her party for 'fraud', while Congress claims that UP government is politicising the issue. Congress on Tuesday asserted that party members along with the fleet of buses will remain at the Uttar Pradesh border till 4 pm on May 20 to wait for the state government's nod on further movement.