Speaking at a press conference, Anurag Thakur, who is on his Jan Ashirwad Yatra, said that he hoped that the Congress would elect its President by 2024. 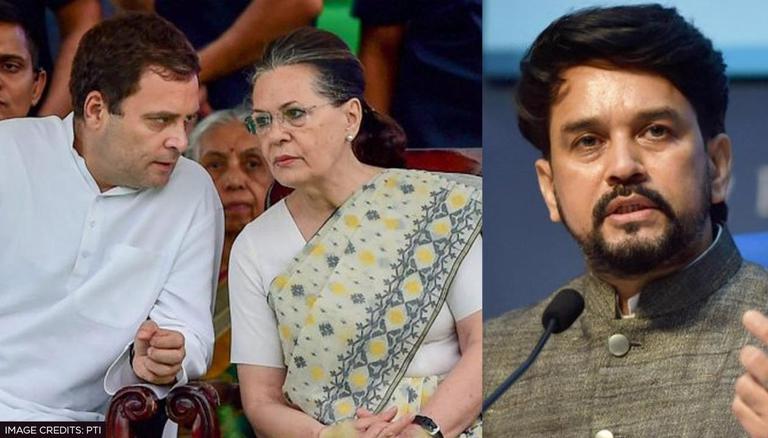 
Amid reports of the Congress forming a united front with the Opposition parties for the 2024 Lok Sabha Elections, Union Minister for Information and Broadcast (I&B) Anurag Thakur on Friday took a jibe at the grand-old party asking it to elect its President first. Speaking at a press conference in Himachal Pradesh's Shimla, Anurag Thakur who is on his Jan Ashirwad Yatra said that he hoped that the Congress could elect its President by 2024.

"I hope Congress party elects its president by 2024," the Union Minister said when a reporter asked him about the agendas, on which Bharatiya Janata Party (BJP) will contest the upcoming elections.

The post of the Congress President has been clouded in uncertainty ever since the resignation of Rahul Gandhi in 2019. Following election drubbing across several states and then the 2019 General Elections, Rahul Gandhi resigned from the post after which Sonia Gandhi assumed charge as the interim President in August of the same year. Since then, there have been reports of the Congress holding elections for the post, however, rumours have died down as soon as they arose.

Last year, 23 senior leaders including loyalists along the likes of Kapil Sibal, P Chidambaram and Ghulam Nabi Azad expressed their unhappiness over the structure of the party and noted that the Congress had 'weakened' at a grass-root level. However, the resistance was short-lived and was snubbed.  The CWC has since then held several virtual meetings which have come to blows, and other announcements which have failed to materialise into elections for the post.

The latest reports had suggested that the election for the Congress president's post will be held after the Monsoon session of Parliament. So far, there has been no development on that front either.

Opposition to chart out strategy ahead of 2024 Lok Sabha Elections

Speaking to ANI, Sitaram Yechury said, "We have to take up the issues related to the common man. The questions are about COVID-19 mismanagement, shortage of vaccine, economic slowdown, unemployment, hunger, price hike of essential commodities, the farmers issue, government privatisation policy and Pegasus snooping row. All these questions were to be discussed in the Parliament and the government did not allow the discussion so, we will go to the public regarding all these issues," Yechury said.