In the biggest political twist, months ahead of Bihar elections, Nitish Kumar led Janta Dal-United (JDU) has expelled poll strategist and its vice president Prashant Kishor from the party. Additionally, it has also expelled spokesperson Pavan Varma from the party. The decision comes a day after JDU chief and CM Nitish Kumar warned Kishor that he has to be in limits if he chooses to be in the party. Responding to him, Kishor, who had joined JDU in September 2018 called Kumar a "liar". Nitish Kumar had also claimed that Kishor was inducted in the party on the refernce of the then BJP chief Amit Shah. 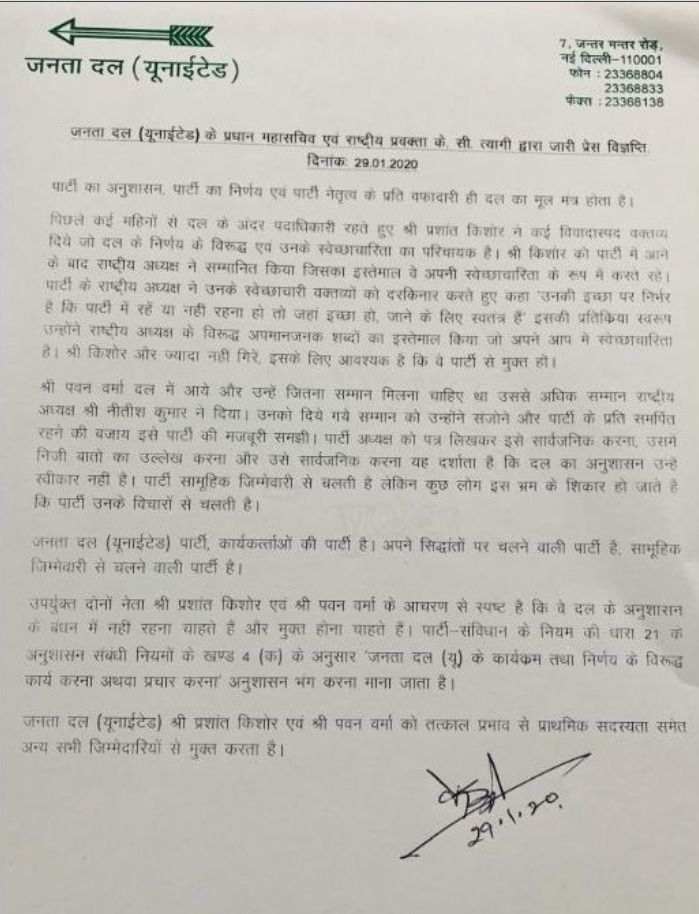 Meanwhile, Pavan Varma had raised questions on Kumar and asked him to clarify his stance on the alliance with the BJP. Varma had written a letter to Nitish Kumar and made it public. In the letter, he had claimed that Kumar’s private views about BJP were less than favourable. Surprised at the decision of his party to extend the BJP alliance beyond Bihar, he urged Kumar to provide clarity on the party’s ideological agenda at a juncture when there were mixed views about the CAA and the National Register of Citizens (NRC).

Speaking on the letter, Nitish Kumar had slammed him and had wished him luck saying: "he is free to go”wherever he likes, if he disagrees with the party." Kumar, also expressed strong displeasure over Varma sharing on the social media a letter wherein he had mentioned of the Chief Minister having expressed apprehensions “in private” about the BJP’s “divisive” agenda.

Kishor's induction in JDU as party's vice president in September 2018 raised many eyebrows. However, following his induction, the JDU fared extremely well in the Lok Sabha polls along with ally BJP, completely decimating Lalu Prasad Yadav's RJD Kishor, a poll strategist heading a team called I-PAC, worked for Andhra CM Jagan Mohan Reddy's election campaign even as he held the post of JDU VC. The twist in the events came when his team was roped-in to assist West Bengal CM Mamata Banerjee for 2021 assembly polls.

Even as it stirred controversy and irked the ally BJP, Nitish Kumar had said that he does not interfere in Kishor's work. Kishor is currently working for Arvind Kejriwal for the Delhi polls. In the course of campaigning, Kishor has not only targeted the BJP but has gone on to question former BJP chief Amit Shah. Breaking his silence even as things seemed out of place within the JDU, Nitish Kumar on January 28 said that it was Amit Shah who asked him to induct Kishor in the party. He also issued an ultimatum to Kishor, saying "he may go wherever he wants but if he stays, he will have to be within the party limits."

Soon after the Bihar CM placed the ball in BJP's court, Kishor called Nitish a "liar" claiming that he is not revealing the circumstances under which he was "made to join JDU." Taking to Twitter, he said: "Poor attempt on your part to try and make my colour same as yours." With few months left for the assembly polls in Bihar, it is interesting to see how Kishor's expulsion from the party will play a role in the JDU-BJP relations, at a time when Kishor had also stated that JDU will be a big brother in the polls.

READ: Nitish Kumar sounds ultimatum to Prashant Kishor: 'If you stay in JDU, be within limits'