After meeting the BJP leaders, Madhya Pradesh governor Lalji Tandon on Monday said, "They have come here on their own will. My political dignity says I will take appropriate actions as per rule. I have assured them that their rights will be protected."

Amid uncertainty over the floor test, now the Madhya Pradesh assembly has been adjourned till March 25 citing the coronavirus scare. While BJP's Narottam Mishra has said that if Kamal Nath's government does not conduct a floor test, they will move Court. However, Kamal Nath wrote a letter to the governor saying that the floor test at this point is undemocratic. Meanwhile, in his address, Governor Lalji Tandon has urged the leaders to follow democratic ways.

Amid uncertainty over the floor test in the Madhya Pradesh, Narottam Mishra has said that if Kamal Nath's government does not conduct a floor test on Monday, then the saffron party will move to the Court. However, Chief Minister Nath wrote to the Governor saying that floor test cannot happen if the MLAs are held hostage.

Amid suspense over the floor test, Governor Lalji Tandon reached state assmebly on Monday morning and he was received by Chief Minister Kamal Nath. Earlier, Kamal Nath wrote a letter to the governor saying that floor test at this point is undemocratic. Citing Paragraph 173 and 175 of a verdict by Supreme Court in the Nabam Rebia and BAmang Felix Vs Deputy Speaker, Arunachal Pradesh LEgalative Assembly and others, he said that governor has limited powers. He went on to accuse the governor saying that he trusted the BJP sources to believe that Kamal Nath government has lost its majority.Â 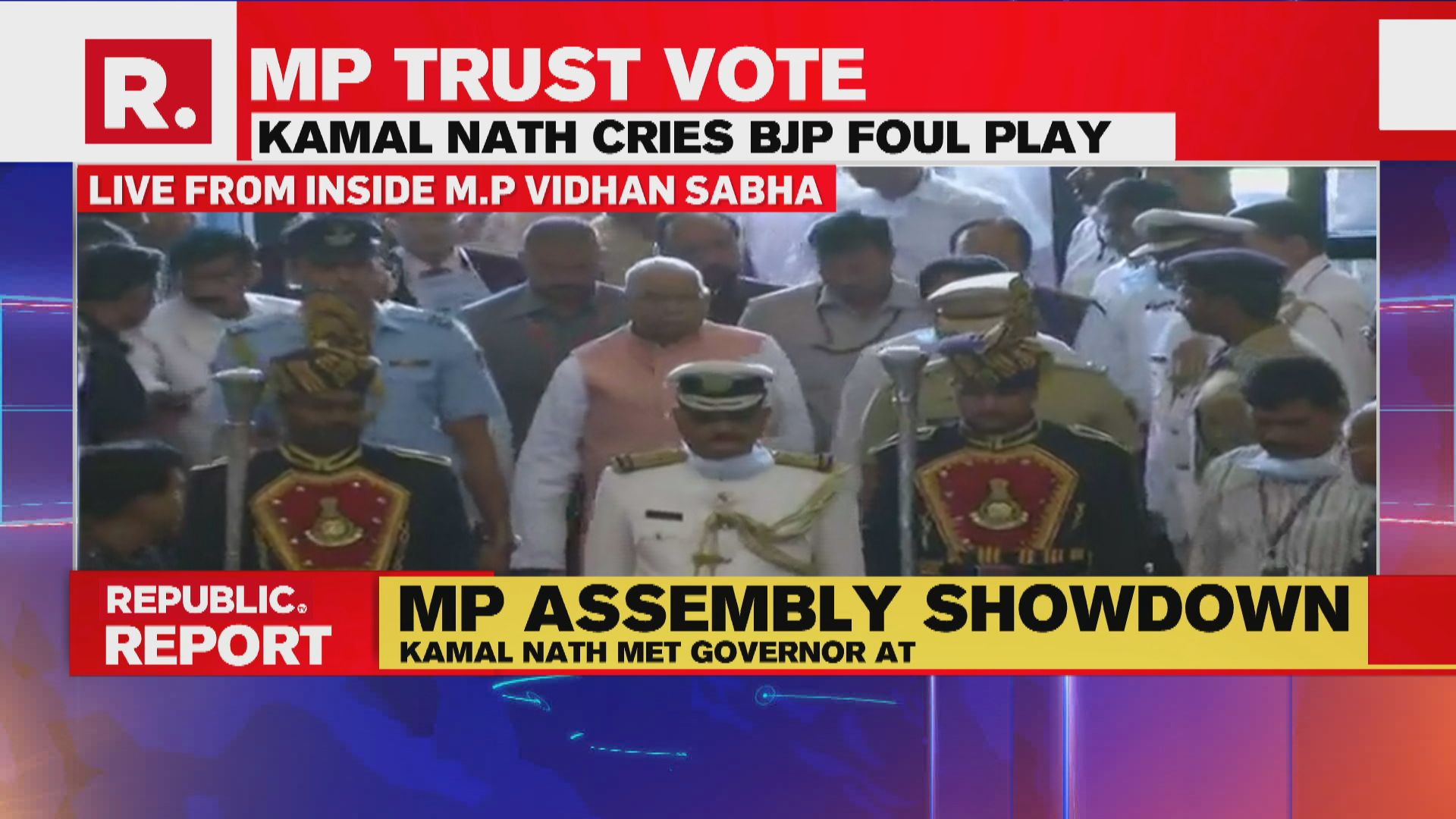 Amid suspense over the floor test and the letter of Kamal Nath to the Governor Lalji Tandon, MLAs and the chief minister has arrived at the Assembly in Bhopal. Governor Tandon will deliver Motion of Thanks in a while.

On March 13, Kamal Nath met with Governor Lalji Tandon at Raj Bhavan in Bhopal. During his meeting, Kamal Nath handed over a letter to the Governor alleging horsetrading of MLAs by BJP and requested him to ensure 'release of MLAs held in captivity in Bengaluru'.

In the letter, the Madhya Pradesh chief minister underlined the "immoral, unethical, illegal" acts of the BJP in the state. Accusing the BJP of 'poaching', Kamal Nath raised questions of the 'Constitutional propriety, legislative procedure, and transparency.'  He claimed that the BJP first attempted on March 3 and 4, which was foiled by the Congress using 'allurement and force'. Later, on March 8, he alleged that in a second attempt the BJP whisked away 19 Congress MLAs to a Bengaluru resort in three chartered aircrafts since then those legislators cannot be communicated.

Accentuating on BJP's complicity in the 'conspiracy and illegal' act, Kamal Nath noted that none of the 19 MLAs were present to tender their resignation at the Speaker's residence themselves but were submitted by BJP leaders. In addition, the chief minister welcomed the floor test notified by the Assembly Speaker on March 16.

Even as the Congress and the BJP MLAs reached the assembly on Monday morning, Kamal Nath has written to the Governor saying that Floor test at this time is 'undemocratic.' In his letter, he said that in had apprised the Governor of the ways in which the BJP has held the Congress MLAs as a hostage. He added that the floor test is only possible when the MLAs are set free. "Floor test in such a situation will be unconstitutional and undemocratic." Citing Paragraph 173 and 175 of a verdict by Supreme Court in the Nabam Rebia and BAmang Felix Vs Deputy Speaker, Arunachal Pradesh LEgalative Assembly and others, he said that governor has limited powers. He went on to accuse the governor saying that he trusted the BJP sources to believe that Kamal Nath government has lost its majority.

After meeting Governor Lalji Tandon in Bhopal, Madhya Pradesh Chief Minister Kamal Nath on Sunday said he is ready for a floor test in the State Assembly and will talk to the Speaker about it. Tandon had on Saturday asked the Speaker Narmada Prasad Prajapati to conduct the floor test on Monday, March 16, the day on which the assembly session begins.

The crisis in the Kamal Nath government started when Congress alleged BJP of poaching 4 MLAs - Surendra Singh Shera, Bisahulal Singh, Hardeep Singh Dang, and Raghuraj Kansana when they were flown to Bengaluru. While two of them have returned to Kamal Nath's folds, 18 MLAs including 6 cabinet ministers - loyal to Scindia flew to Bengaluru on Monday. Though Kamal Nath dissolved his cabinet, making 20 ministers resign on Monday night at an apparent cabinet rejig attempt, it failed and all 6 rebel cabinet ministers have been expelled.

In a major jolt to the Chief Minister, the former Guna MP Jyotiraditya Scindia formally submitted his resignation to Congress interim chief Sonia Gandhi on Tuesday. He then formally joined the BJP after he met Prime Minister Narendra Modi at the latter's residence along with former BJP party chief Amit Shah and has since then slammed the Congress saying 'it was not the same anymore'. He has since then been fielded by the BJP for the upcoming Rajya Sabha polls.