In a massive development, Rashmi Thackeray- the wife of Maharashtra Chief Minister Uddhav Thackeray has been named as the new editor of Sena mouthpiece Saamana.

In a massive development on Sunday, Rashmi Thackeray- the wife of Maharashtra Chief Minister Uddhav Thackeray - has been named as the new editor of Shiv Sena mouthpiece Saamana. Rajya Sabha MP Sanjay Raut will continue as the Executive Editor of Saamana. Saamana has been at the forefront of propagating the core ideological beliefs and stance of the Sena on critical issues.

While Balasaheb Thackeray was the founding editor of the daily since January 23, 1989, his son Uddhav took over this responsibility after the former's death in 2012. However, Sena chief Uddhav Thackeray stepped down as Editor after taking over as the Chief Minister of Maharashtra in November 2019. While Rashmi Thackeray has been perceived to have played a behind the scenes role in the Sena, this will be her first official association with the party. Her son Aaditya, a first-time MLA from Worli, is currently serving as the Environment, Protocol and Tourism Minister in the Uddhav Thackeray government. 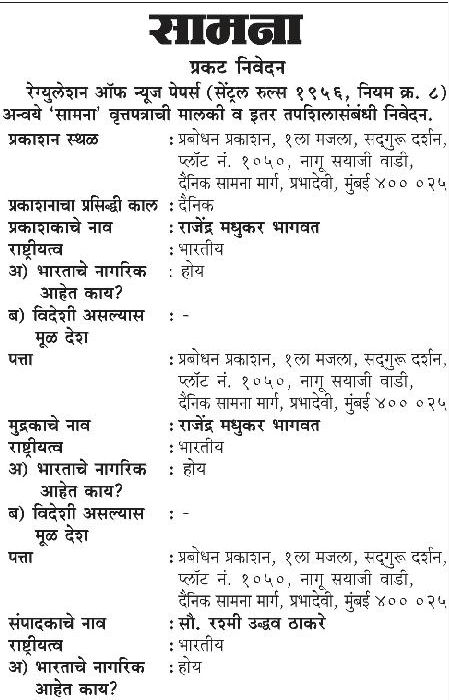