MP and Trinamool Congress leader Mahua Moitra shared a picture on Twitter highlighting the distinctions in the National Emblem on Tuesday. 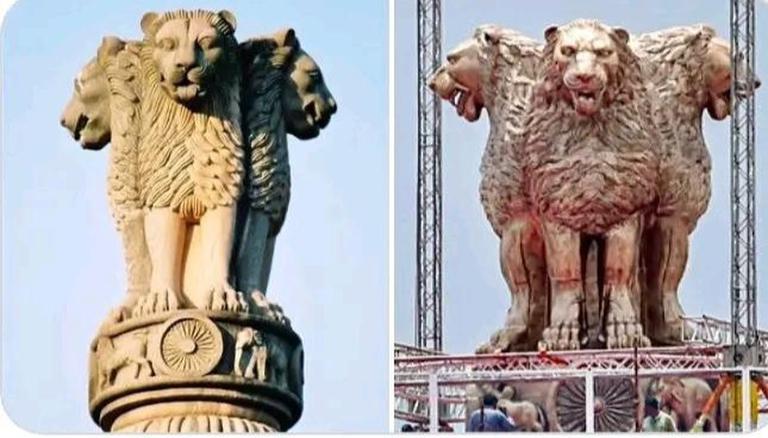 
Joining in the Opposition's furore over the alleged distortion of the National Emblem in the cast atop the new Parliament building, MP and Trinamool Congress leader Mahua Moitra shared a picture on Twitter highlighting the distinctions on Tuesday. In a follow-up tweet, Moitra took a dig at the dispensation and said that the 'transition from Satyameva Jayate to Singhameva Jayate has long been completed in spirit'. She later said she didn't want to drag Lions into the row and changed 'Singhameva' to 'Sanghimeva'.

The tweet came after Congress' Adhir Ranjan Chowdhury requested Prime Minister Narendra Modi to observe the face of the Lion. "Whether it is representing the statue of Great Sarnath or a distorted version of GIR lion. Please check it and if it needs, mend the same," the MP wrote, throwing in a fairly unnecessary jibe at the Gir lion, which should by all estimates be a national treasure.

In the presence of the Speaker of the Lower House of Parliament, Om Birla, and Union Housing Minister Hardeep Puri, PM Modi unveiled the bronze emblem. With a total weight of 9,500 kg, the emblem is 6.5 metres in height and 3.3 to 4.3 metres in diameter. It has been built in Aurangabad, Jaipur and Delhi by artists Sunil Deore and Lakshman Vyas.

Truth be told, transition from Satyameva Jayate to Singhameva Jayate has long been completed in spirit.

Pertinently, a day ago, the Opposition had accused PM Modi of overstepping the Constitutional propriety of the Prime Minister by unveiling the emblem atop the Parliament building. Member of Parliament and AIMIM supremo Asaddudin Owaisi said that as the Head of the Government, PM Modi 'should not have' unveiled the adaptation of the Lion Capital of Ashoka, and instead, the Speaker of the Lok Sabha, the Lower House of the Parliament, Om Birla should have done it. The position 'isn't subordinate', the Parliamentarian from Hyderabad said.

New Parliament building- a reason for sore eyes of Opposition?

A part of the government’s ambitious Central Vista Redevelopment Project, the new Parliament building's foundation stone was laid by the PM at a ceremony in December, 2020, calling it “a landmark of India’s democracy”. He said, “If the old parliament building gave direction to India after independence, the new building would be a witness to the making of an Aatmanirbhar Bharat.”

Soon thereafter, the Opposition teamed up against the BJP-led government, with Congress'  Randeep Singh Surjewala, calling it a case of 'misplaced priorities of a whimsical autocrat seeking to etch his name in the annals of history with cement and mortar'.

Thereafter, in September 2021, when the PM paid a surprise visit to the construction site of the new Parliament building, conducting a first-hand inspection of the construction status for over an hour, he was once again attacked by the Opposition. Congress' Pawan Khera listing the challenges the country was facing, had asked, "I don't know if the prime minister was seen visiting a hospital or an oxygen plant under construction. Three months ago, we were trying to save our loved ones and today our PM goes to visit the Rs 25,000 crore Central Vista project, the timing of which is questionable."

READ | A unique installation, how the National Emblem on the new Parliament building stands out
First Published: 12th July, 2022 18:11 IST
SUBSCRIBE TO US