BSP supremo Mayawati tore into her political opponents while addressing a rally in Lucknow on the occasion of party founder Kanshi Ram's death anniversary. 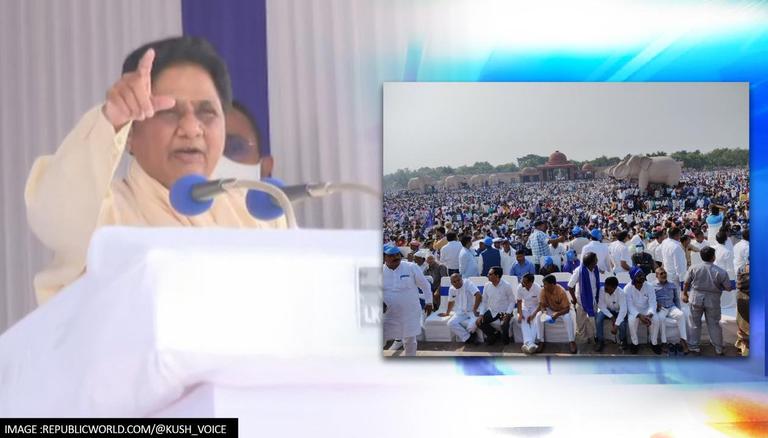 
BSP supremo Mayawati tore into her political opponents while addressing a massive rally in Lucknow on the occasion of party founder Kanshi Ram's death anniversary. Alleging that BJP was misusing state machinery to turn the tide in its favour, she also warned that the saffron party might accrue political advantage by communalising the upcoming Uttar Pradesh Assembly polls. She added, "All farmers of the country are holding an agitation against the Centre's three farm laws. Now, the protesting farmers are being heavily exploited. The incident in Lakhimpur-Kheri is a prime example of this".

The former UP CM also lambasted the state governments governed by BJP, Congress, Shiv Sena and AAP for not providing assistance to people hailing from UP during the coronavirus-induced lockdown. Coming down heavily on the Arvind Kejriwal-led party, Mayawati opined, "Neither did the AAP government take care of the daily needs of people hailing from UP during the lockdown but also did not do proper arrangements for their return to the state. The same AAP is asking for the support of the people for the upcoming Assembly election in UP. It is necessary for the people of UP to teach them a lesson in this election".

She stated, "Along with BJP, SP and Congress, AAP, Owaisi's party, Shiv Sena and other parties are making a number of promises to win votes. There is no substance in them. The people of the state should not fall into the trap of the tempting promises which are going to be made by the opposition parties in their election manifestos. After coming to power, the majority of these promises are not implemented."

On this occasion, Mayawati also outlined BSP's roadmap for the state and promised to continue implementing the schemes started by the BJP and SP governments which are in "public interest". She stressed, "After forming the government, our party will focus primarily on making available employment opportunities for the poor and unemployed youth. So that, they don't have to migrate from UP henceforth for the purpose of employment. This will be our main poll plank".

Elaborating further, the BSP supremo asserted, "The welfare schemes for Dalits, Adivasis, backward classes, Muslims, religious minorities, poor, unemployed, farmers, small traders, lawyers, students, youth, women and the elderly welfare schemes which commenced in our 4 governments and were taken forward by SP and BSP will be reimplemented. All necessities such as water and electricity will be provided. A commission will be formed to address the concerns of the employees of the education and other departments who often stage demonstrations and their genuine demands will be accepted. The most backward regions of the state will be developed on a priority basis."

She noted that BSP would concentrate on improving the existing hospitals, colleges, roads and bridges before embarking on new projects. Mayawati also promised to ensure the safety of the Brahmin community and the upliftment of Muslims. Compared to BJP (312) and the SP-Congress alliance (54), BSP could win only 19 seats in the 2017 UP Assembly polls.