Taking charge of the Punjab Congress, state unit chief Navjot Singh Sidhu hosted 62 MLAs at his palatial Amritsar home on Wednesday, in a show of strength 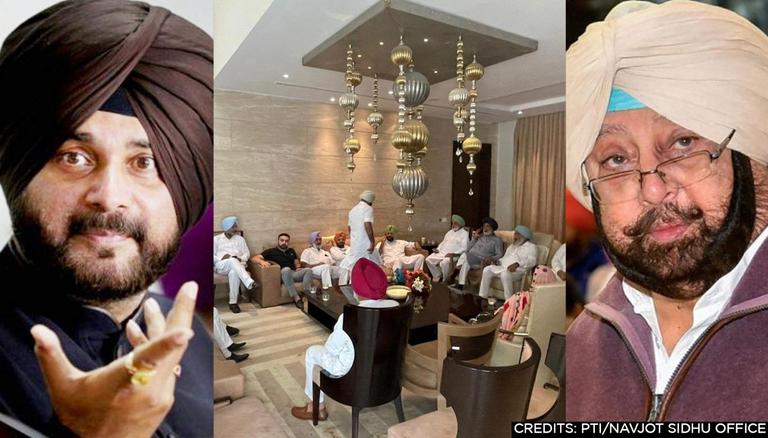 
Taking charge of the Punjab Congress, state unit chief Navjot Singh Sidhu hosted 62 MLAs at his palatial Amritsar home on Wednesday, in a show of strength at breakfast. The newly anointed party chief is also scheduled to visit the Golden Temple with the MLAs. Absent from Sidhu's 'show of strength' was CM Capt Amarinder Singh who has refused to meet Sidhu till he 'publically apologises' for his tirade against him. Punjab goes to polls in February 2022.

Addressing the media, Congress MLA Pargat Singh - a vocal critic of the CM, said, "Why should Sidhu apologise (to CM)? It's not a public issue. CM has not solved many issues. In that case, he should also apologise to public".

On Tuesday, breaking his silence on Sidhu's elevation, Singh's media advisor Raveen Thukral asserted that the CM will not meet Sidhu till he apologised for his continued tirade against CM. "Reports of Sidhu seeking time to meet Captain are totally false. No time has been sought whatsoever. No change in hs stance... the CM won’t meet Navjot Singh Sidhu till he publicly apologizes for his personally derogatory social media attacks against him," Captain's Media Advisor said.

Putting an end to the speculation, Congress Interim President Sonia Gandhi appointed Navjot Singh Sidhu as the President of the Punjab Pradesh Congress Committee replacing  Sunil Jakhar. In a bid to balance the power equation between the CM and Sidhu, Congress appointed four Working presidents to the state unit - Sangat Singh Gilzian, Sukhwinder Singh Danny, Pawan Goel, and Kuljit Singh Nagra. While Amarinder Singh affirmed that he will abide by High Command's decision, he was reportedly not informed of Sidhu's appointment. The miffed CM has not publicly congratulated Sidhu and instead met with his loyalists.

Sources stated that top leaders in Captain Amarinder's camp allegedly felt that appointing a man who is known to be a 'friend' of Pakistan Prime Minister Imran Khan and Pakistan Army Chief Qamar Javed Bajwa is 'a big mistake'. Sources state that the Punjab CM was worried of alienating the Hindu vote bank in Punjab by Sidhu's elevation and backed  Congress MP Manish Tewari for the top post as a 'Hindu face'. All Punjab Congress MPs unanimously opposed Sidhu's elevation.

Sidhu has been at loggerheads with the Punjab Chief Minister after he denied Sidhu's wife Navjot Kaur Sidhu a ticket for the Lok Sabha elections. Later, he was divested of several portfolios which led to his resignation from the cabinet.  He later patched up with CM Amarinder Singh over an informal lunch, but it seems to have gone awry as Sidhu began to attack the CM again. After the HC quashed the SIT probe into 2015 firing sacrilege cases, he targeted the CM for not acting against key Shiromani Akali Dal leaders in the same case. Recently, the Amritsar East MLA has taken to Twitter to advise the CM to cut down on power costs, tweeting several radical suggestions. After the High Command hauled the CM over Sidhu's allegations, Sidhu was made state chief, against Capt Singh's wishes.