Sharad Pawar To Be Discharged From Hospital On Saturday; Advised To Rest For 7 Days

Days after Sharad Pawar was admitted to a Mumbai Hospital, the NCP chief is expected to be discharged after his health parameters showed positive signs


Days, after he was admitted to Mumbai Breach Candy Hospital, NCP chief Sharad Pawar, will be discharged on Saturday. Providing an update on Pawar's health, NCP leader Nawab Malik also stated that the NCP chief has been advised to rest for seven days. Malik further added that the gall bladder surgery will be performed after 15 days if Pawar's health parameters are stable.

Sharad Pawar was checked upon by doctors today & his health is stable, he'll be discharged today. He has been advised rest for 7 days & after 15 days if all his health parameters are stable, surgery on his gall bladder will be performed: Maharashtra Min & NCP leader Nawab Malik pic.twitter.com/msptjHxIL2

Earlier on March 31, NCP leader and Sharad Pawar's daughter Supriya Sule shared Pawar's picture while he was reading a newspaper in the hospital. In addition, she also thanked the hospital staff.

Good Morning! Thanking all the Doctors, Nurses and Entire Team Breach Candy Hospital.
Hon.@PawarSpeaks Saheb is doing what he loves the most reading his Morning Newspapers!

Meanwhile, after Pawar's endoscopy which took place ahead of schedule, Maharashtra Health Minister Rajesh Tope too informed that Pawar is doing well. "Sharad Pawar Ji is doing well after the operation. Stone has been removed from the gallbladder successfully. It was done through endoscopy," Tope told ANI. In addition, interacting with the media, Doctor Amit Maydeo stated that after tests, the doctors decided to go ahead with the surgery due to complications.

"The procedure was of half an hour. We will be deciding on the removal of his Gallbladder later. His condition is fine but since the procedure was done just a while ago, so currently, he is under observation," Dr Maydeo had said to ANI.

The NCP chief was taken to Mumbai's Breach Candy hospital for a checkup after he was feeling uneasy. Upon diagnosis, it emerged that Sharad Pawar has a gallbladder issue. Party leader Nawab Malik had also stated that Sharad Pawar was on 'Blood Thinning Medication'. 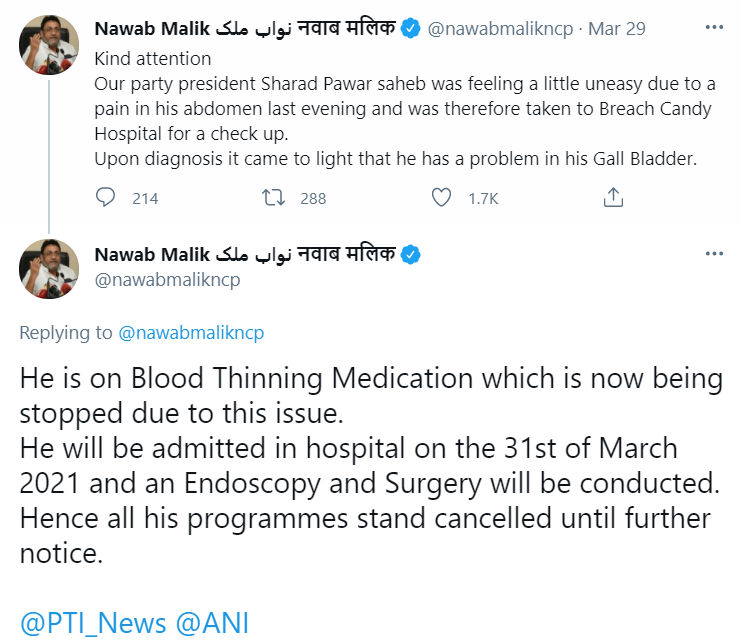