Congress MP Shashi Tharoor on Thursday courted controversy after he tweeted that former Lok Sabha Speaker Sumitra Mahajan has passed away at 78.

Congress MP Shashi Tharoor on Thursday courted controversy after he tweeted that former Lok Sabha Speaker Sumitra Mahajan has passed away at 78. He was soon corrected by BJP leader Kailash Vijayvargiya, who informed via Twitter that Mahajan is "hale and hearty." Tharoor then deleted his tweet and posted a new one saying, “I wonder what motivates people to invent and spread such evil news that takes in people.”

The Lok Sabha Speaker herself reacted to the false news saying, "How could news channels run a report on my so-called demise without even cross-checking with the Indore administration? My niece refuted Mr Tharoor on Twitter but what was the urgency in announcing without confirmation?" she added.

Falling for fake news, Tharoor had said in a tweet: "Saddened to learn of the passing of former LokSabha Speaker Sumitra Mahajan. I remember many positive interactions with her, including when she &the late Sushma Swaraj asked me to lead a Parliamentary delegation to BRICS in Moscow. My condolences to her family and prayers: Om Shanti!” 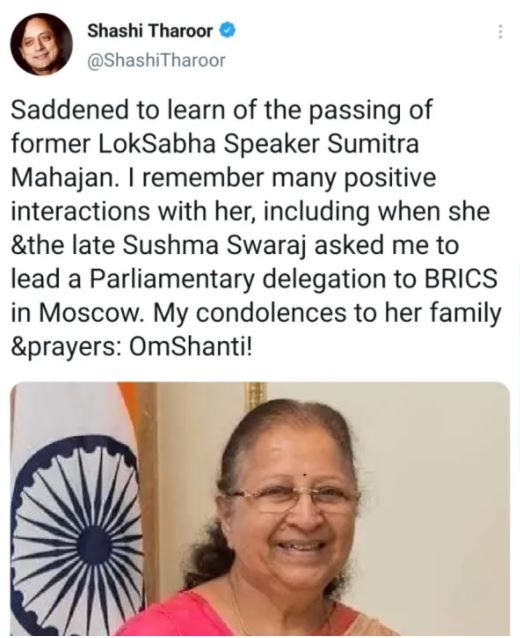 Thanks @kailashOnline. I have deleted my tweet. I wonder what motivates people to invent and spread such evil news that takes in people. My best wishes for Sumitra ji’s health and long life. 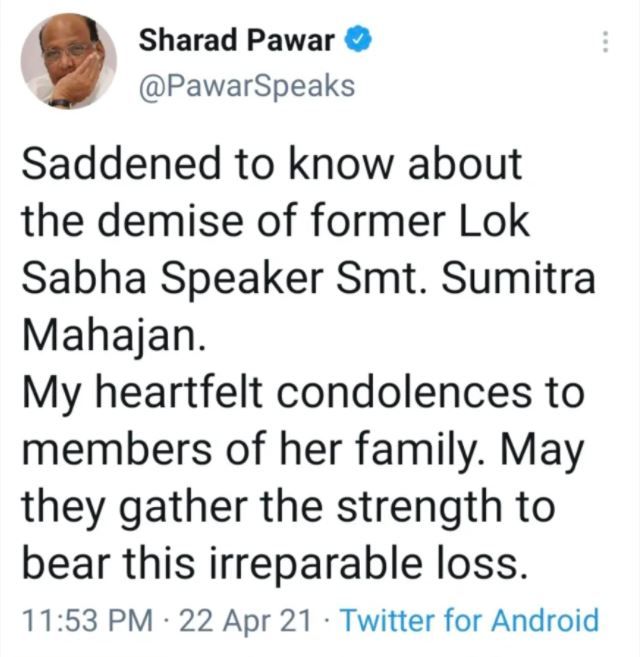 As per reports, Sumitra Mahajan had complained of fever and was subsequently tested negative for COVID-19.

In a similar instance back in March, Tharoor had apologised for his comment on Prime Minister Narendra Modi’s speech on the Bangladesh war. The Congress leader had tweeted indicating that PM Modi did not acknowledge former Prime Minister Indira Gandhi’s contribution to liberating Bangladesh in 1971.

READ | Congress demands one nation, one price for COVID vaccines

Taking to Twitter to Tharoor admitted that his remark on PM Modi’s Dhaka speech was based on some “hasty reading of newspaper headlines” and thus erroneous. Apologising for the same, Tharoor said, “Yesterday, on the basis of a quick reading of headlines, I tweeted – ‘everyone knows who liberated Bangladesh’ - implying that PM Modi had omitted to acknowledge Indira Gandhi. It turns out he did. Sorry!”