Prahlad Joshi remarked that both, Sonia and Rahul Gandhi, do not have 'confidence' in Indian vaccine as they have not taken the anti-COVID jab yet 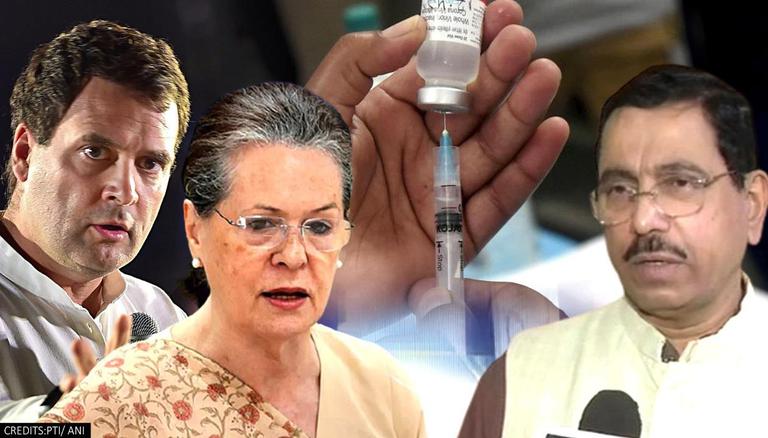 
With Samajwadi Party (SP) supremo Akhilesh Yadav being the latest Opposition leader to flip stance on Indian COVID-19 vaccines, Union Parliamentary Affairs Minister Prahlad Joshi took a dig at the Congress, targetting interim party chief Sonia Gandhi and her son Rahul Gandhi. The Union Minister remarked that both Sonia and Rahul Gandhi do not have 'confidence' in Indian vaccine as they have not taken the anti-COVID jab yet, even as the Wayanad MP continues to play politics over the expansion of the immunization drive.

Highlighting the u-turn by Congress leaders, Prahlad Joshi while speaking to ANI on Tuesday said that when the vaccination drive was started in January, Congress leaders raised questions on vaccine efficacy, and now they are taking it. Joshi was referring to Congress' hue and cry over the DCGI approval given to Bharat Biotech's COVAXIN in India. The Opposition party had raised questions over the permission granted to COVAXIN for restricted use until data of phase 3 clinical trials was published. The Opposition was eventually left in tatters as Prime Minister Narendra Modi shunned all doubts surrounding the Indian-made vaccine by being administered with COVAXIN.

"When we started vaccination in Jan, Congress leaders raised questions on vaccine efficacy. Now, they're taking the vaccine. As per my knowledge, Sonia & Rahul Gandhi haven't taken vaccines. They don't have confidence in Indian vaccine," said Prahlad Joshi on Tuesday.

Moreover, the Union Minister also apprised on the Monsoon Session of Parliament, stating that the Centre is hopeful of the session beginning as per normal schedule in July. Highlighting that the government is prepared to run the Parliament, Prahlad Joshi hoped that all MPs and Parliament staff will be inoculated by July.

We are hopeful that the monsoon session of parliament will begin as per its normal schedule in July. We are fully prepared to run the parliament. We hope that MPs and parliament staff will be vaccinated in July: Union Minister for Parliamentary Affairs, Prahlad Joshi pic.twitter.com/9xu8MNxwvQ

After engaging in politics over the COVID-19 vaccine and dubbing it as a 'BJP vaccine' for months, Samajwadi Party (SP) chief Akhilesh Yadav on Tuesday announced that he will get himself vaccinated urging everyone to do the same. Taking to Twitter, Akhilesh Yadav remarked that while the Samajwadi Party was against the 'BJP vaccine' they welcomed the 'vaccine of the Government of India.'

READ | COVID-19: WHO urges vaccine manufacturers to give at least 50% of doses to COVAX programme

In an address to the Nation on Monday, Prime Minister Narendra Modi announced a 100% Centralised Vaccination drive against the COVID-19 pandemic, which will be implemented within two weeks. Making the key announcement, PM Modi announced the scrapping of decentralized policy rolled out on May 1, adding that the Centre will account for procurement of 75% of COVID-19 vaccines from the manufacturers and subsequently provide these free to the States for inoculation. The remaining 25% would be available for private players, with a Rs 150 cap on the service charge they may apply.