Hailing the Supreme Court's unanimous verdict in the Ayodhya dispute, the Uttar Pradesh Sunni Central Waqf board's chairman Zufar Faruqi, on Saturday has welcomed the verdict, clarifying that it will not file a review petition, according to the press release. It added that any statement made otherwise mentioning the UP Sunni Central Waqf board is not in line with its stance. The board also thanked the apex court for setting aside the 'erroneous' observation of the Allahabad High Court's 2010 verdict diluting the provisions of the Places of Worship Act 1991.

Waqf board seeks no review of SC verdict 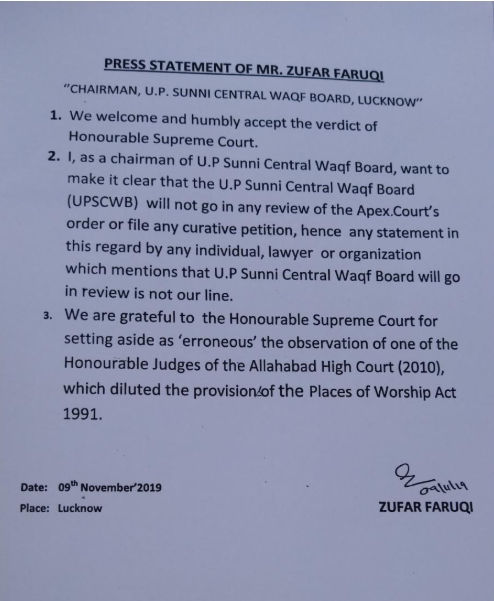 The Sunni Central Waqf Board which is one of the Muslim parties in the case had agreed to surrender its claim over the disputed land in Ayodhya during the mediation settlement submitted on October 16. While the board had agreed to mediation, in the Supreme court, the Muslim parties had strongly opposed the agreement reached between the parties during the mediation proceedings. They had also given details of the alternate reliefs the Supreme Court may provide in case the suit is not decided in their favour. They had also opposed the Hindu parties' claim on the disputed land on the basis of the existence of the birthplace of Lord Ram.

READ | Ayodhya Verdict: Disputed land to be given to Hindus, holds SC

AIMPLB and Owaisi dissatisfied with verdict

Meanwhile, the All India Muslim Personal Law Board (AIMPLB) said that the body respects the judgment of the Supreme Court on the Ayodhya title case but will think over filing a review after going through the entire judgment. Similarly, AIMIM chief Asaduddin Owaisi stated that the verdict was final but he was dissatisfied with the verdict. Quoting Justice Verma, he said that the 'Supreme Court was Supreme but not infallible'.He also advised the All India Muslim Personal Law Board (AMPLB) to reject the SC offer to allot an alternated 5- acre land to construct a mosque.

Pronouncing the landmark judgment in the Ayodhya dispute case, the Supreme Court on Saturday, delivered a unanimous judgment in the title suit of the disputed area awarding it to the Hindu parties for the construction of a temple. It also directed the Centre to come up with a scheme within three months to set up a trust which will hand over the outer courtyard and inner courtyard of the site for construction of a temple. Apart from this, the SC stated that an alternate land of 5 acres is to be allotted to Muslims for the liberty of constructing a mosque, either by the central govt or the State govt, in a suitable and prominent place in Ayodhya. CJI Ranjan Gogoi, while delivering the unanimous judgment, dismissed the claims of the Sunni Central Waqf Board and the Nirmohi Akhara. He also termed that the three-way division of the disputed land by the Allahabad HC in its 2010 verdict is wrong.