Ahead of the 2022 UP Assembly elections, CM Yogi Adityanath categorically stated that the law against 'Love Jihad' was passed in the state way before the polls 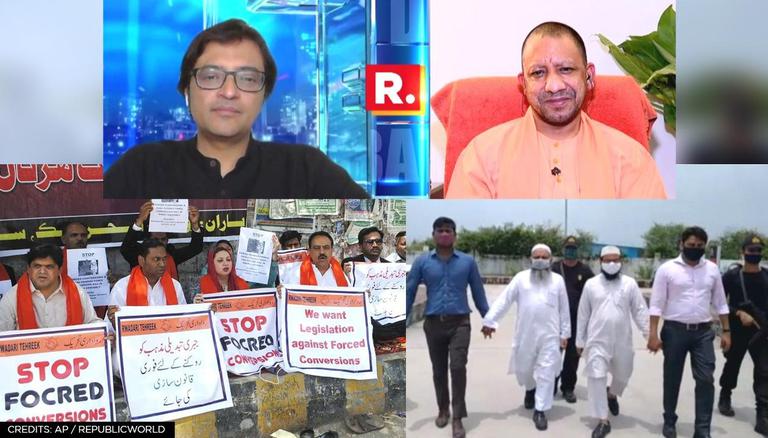 
Ahead of the 2022 Uttar Pradesh Assembly elections, CM Yogi Adityanath categorically stated that the law against 'Love Jihad' was passed in the state way before the polls and highlighted that the law had never been misused by the government. Speaking to Republic Media Network's Editor-in-chief Arnab Goswami in an exclusive interview after BJP swept the Zilla Panchayat polls, UP CM Yogi Adityanath noted that the matter of forced conversions was not just against one religion but was a matter of national security.

Elaborating on forced conversions and the actions of the UP government on the perpetrators, CM Yogi Adityanath said that two individuals had attempted to enter an ashram in Ghaziabad to meet a saint by giving fake Hindu names at the gate. The UP CM revealed that a surgical blade was found in the possession of the two individuals on being searched following which they were interrogated.

"When I received the information, I asked why the surgical blade? A surgical blade is used in the operation theatre and it is very sharp. If the blade is misused, then it can lead to the death of the person within minutes," UP CM Yogi Adityanath told Arnab Goswami in an exclusive interview with Republic TV.

UP CM Yogi Adityanath said that it was found that the identity of the individuals was proved to be fake on an investigation by the state's agencies and that they were Muslims. On further investigation into the surgical blade found in their possession, a link with the Batala House had emerged following which connections with Mohammad Umar Gautam also surfaced. UP CM Yogi Adityanath revealed that Umar Gautam had established his network across 25 states in India via the Batala House and claimed that he received funding from agencies around the world via hawala.

"We have all the proof. A full team of 500 members are working on this case. This is a big crime," UP CM Yogi Adityanath told Republic's Editor-in-Chief Arnab Goswami in an exclusive interview.

Elaborating on the modus operandi, UP CM Yogi Adityanath stated that the perpetrators used deaf and dumb children to gain entry into houses following which they converted the entire family. The UP CM went on to claim that the deaf and dumb children received training via WhatsApp messages and noted that such messages could only be deciphered by special cyber experts. Making an explosive claim, CM Yogi Adityanath said that these deaf and dumb children were used for attacking important centres, religious places, VVIPs, as a part of a suicide squad and claimed that this conspiracy had been busted by the state's law enforcement agencies.

#WATCH | We have a team of 500 officers working to probe this, we will get to the bottom of this. We will not let people play with national security. The truth will come out: UP CM @myogiadityanath on forced conversion racket

Conversion racket busted in UP

The alleged conversion racket was busted by the Uttar Pradesh Anti-Terror Squad (ATS) following the registration of an FIR in the case at Lucknow’s ATS police station. As per reports, two men of Delhi’s Jamia Nagar were allegedly running an outfit involved in converting deaf and dumb students and other poor people to Islam in Uttar Pradesh with funding from Pakistan’s ISI. Moreover, children and women were also lured in with false promises of cash, job, and marriage, and later, converted. Gautam, who is one of the two accused arrested in the beginning, and himself a convert to Islam from Hinduism, boasted to the police of having converted at least 1,000 people to Islam. “I converted at least 1,000 non-Muslims to Islam, marrying them all to Muslims,” Kumar quoted Gautam as boasting.

Meanwhile, the ATS has nabbed three more individuals in connection with the conversion racket. Rahul Bhola, Mannu Yadav (Abdul Manan) and Irfan Khayaza after the interrogation of Umar Gautam. Addressing a press briefing on Monday, the UP ADG Law & Order Prashant Kumar informed that Irfan Khayaza is an Interpreter in the Ministry of Children's Welfare in Delhi.

Using his influence, Khayaza used to manipulate the dumb and deaf people and speak ill about other religions, the police said. He used to provide gifts and other inducements to attract the people and get them converted. Khayaza was accompanied by Rahul Bhola, who is also deaf. Both of them would force people to get converted and distribute conversion certificates with the help of Umar Gautam. Mannu Yadav and another accused Aditya Gupta were also converted by them.