Chief Minister Pushkar Singh Dhami launched the 'Vikas Rath Yatra' from Dehradun on Wednesday, ahead of the 2022 Uttarakhand Assembly elections. 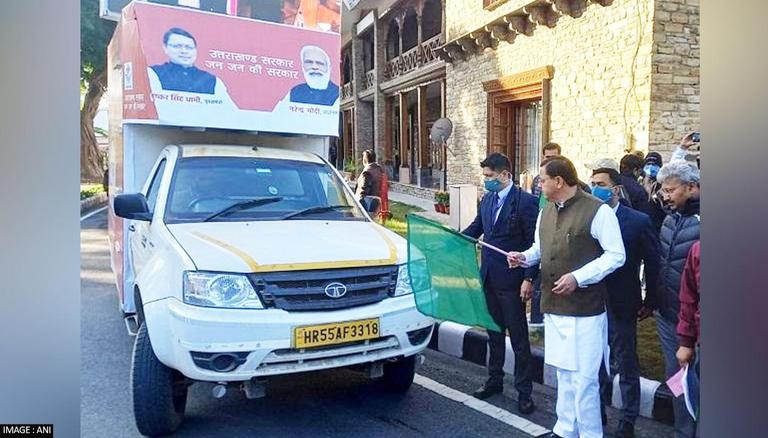 
On Wednesday, Chief Minister Pushkar Singh Dhami launched the 'Vikas Rath Yatra' from Dehradun, ahead of the 2022 Uttarakhand Assembly elections. The purpose of the 'Vikar Rath Yatra' is to raise awareness about the benefits of various public welfare initiatives and policies implemented by the central and state governments.

Meanwhile, Prasoon Joshi, the Chairman of the Central Board of Film Certification (CBFC) and an ace lyricist, recently met with Uttarakhand Chief Minister Pushkar Singh Dhami. The two met at the latter's apartment to discuss filming in Uttarakhand as well as topics relating to cultural promotion and tourism development in the state. Pushkar took to Twitter to share a photo from their meeting as well as an outline of the topics discussed.

In addition, as the assembly polls nearing, the Uttarakhand administration has stated that the Char Dham Devasthanam Board Management Bill will be repealed, announced the government's decision to reverse the controversial act. In the presence of State Assembly Speaker Premchand Aggarwal and cabinet ministers Subodh Uniyal and Satpal Maharaj, a report evaluated by a high-level committee set up by the Uttarakhand government was presented to Dhami. The report recommends that the Chief Minister repeal the act that places more than 50 temples under the supervision of the state government.

Prime Minister Narendra Modi offered a scorching climax to the Dehradun rally last week, ahead of the Uttrakhand assembly elections in 2022. 'Modi Modi' reverberated in the air of the north Indian state as the Prime Minister continued in a powerful voice, drawing a thundering response from the throng of thousands. On December 4, Prime Minister Narendra Modi inaugurated and laid the foundation stone for numerous infrastructure projects in Dehradun costing roughly Rs 18,000 crores. According to the Ministry of Road Transport and Highways, the Delhi-Dehradun Economic Corridor was a significant emphasis of PM Modi's visit to Uttarakhand as part of attempts to improve the road infrastructure, which will ease travel and boost the tourism sector.

The 70-member Uttarakhand Assembly will be elected in early 2022. In the 2017 Assembly elections, the BJP won 57 seats, the Congress won 11, and the remaining seats were won by others.