No, they are not artificially coloured varieties on white or yellow corn. These lesser-known varieties of corn actually exist and are fast gaining prominence as one of the 'super-foods'.

No, they aren’t artificially coloured white or yellow corn. Red and Blue and Purple and even, Black corn actually exist.

These coloured varieties of corns have its origins far west, in the countries of South America. Been cultivated there for more than 3,000 years, the coloured corns used to be a major food source in the ancient times for the Aztecs. Still today, the variety remains popular, being used in many local desserts and drinks. The crop has a high reverence in the place where it is called 'the plant of remembrances', due to the rich history associated with it.

Interestingly, it has been believed that if you take the Purple Corn and plant it outside of Peru, it loses its purple colour. But, due to the many advantages of colonization, early explorers carried this crop to Europe and it eventually spread to the rest of the world. In India, people in the North-east have been actively cultivating and consuming these lesser-known varieties of corn from a long time. It can be majorly found in Mizoram.

Red kernels can be found in diverse hues of ruby, brick-red and pink tones too, depending on the variety. It has a sweet, nutty flavour which intensifies on cooking. The presence of high phenolic content and anthocyanins is responsible for its distinct colour, which may be present in higher or lower quantities depending on the colour. 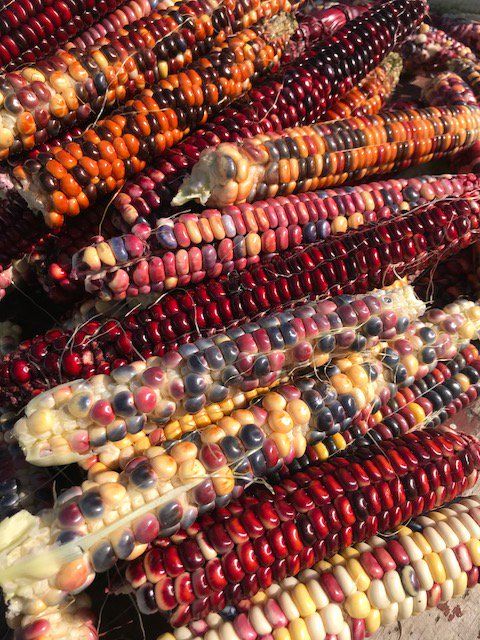 A newly discovered member of the super-foods family, the coloured corns have immense health benefits:

These corns have one of the deepest shades of colour compared to foods founds all over the world. In Peru, Bolivia and Ecuador, the purple corn kernels, especially, are soaked in hot water and the deep colour is commonly used as a colourant in food and beverages. It is a base for some classic dishes like mazamorra, a maize-based dessert and chica-morada, an alcoholic, fermented drink commonly enjoyed in the continent.

Purple corns contain 14 times the nutrients found in the regular yellow corn. Having double the amount of antioxidants usually found in pomegranates and blueberries, these corns have the potential to fight obesity and diabetes. The red varities have 20% more protein and 350% more antioxidants than the common white or yellow corn. Studies conclude that a particular anthocyanin - CG3 - is one of the most powerful antioxidants in existence, found in abundance in these varieties of corn, making it one of the super-foods which is gaining prominence fast.

Studies undertaken at a University in Japan inferred that CG3 had anti-inflammatory responses, inferring, consuming the plant would significantly reduce any inflammations in the body. Reportedly, when tested on rats during some other study, it significantly decreased the number of carcinogenic cells in them. Due to the presence of a high amount of antioxidants, these corns have been associated with having anti-ageing properties.

Reportedly, eating these newly discovered variety of corns can improve the functioning of the nervous system, lower blood pressure and also enhance kidney health. One also has a lesser chance of developing any serious eye disease upon eating this food.

Both corns can be used just as the regular corn. Added are the aesthetic benefits that come with the coloured corns. It adds more colour to the dish and makes it more lively and interesting to eat. They look just beautiful! 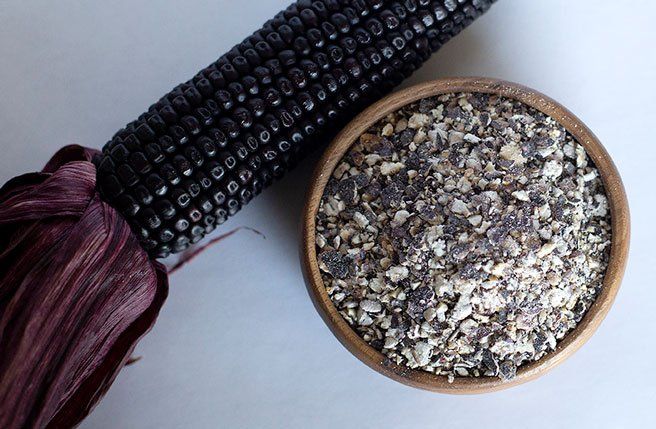 WHERE CAN YOU FIND THEM?

Though not as popular as the white or yellow corns, the purple, blue, red and black corns can be found in abundance in the South American countries - where they can be enjoyed as hot 'corn on the cob’ dishes. In America, these can be seen converted into varieties of packed chips, popcorns or flours. Indians needn’t go that far though. You just need to travel far up the seven sisters and discover this treasure. Grown extensively in Mizoram, these coloured corns are really popular with the locals. It is used in daily cooking and also in a traditional desserts known as ‘Mim Ban’.

Did you know about these coloured corns? Let us know in the comments below.