Chris Evans, Jack Black To Appear On Live Webcast Of NASA's Artemis I Launch; How To Watch

Chris Evans, along with Jack Black and Keke Palmer along with others will make special appearances during the live webcast of the Artemis I launch. 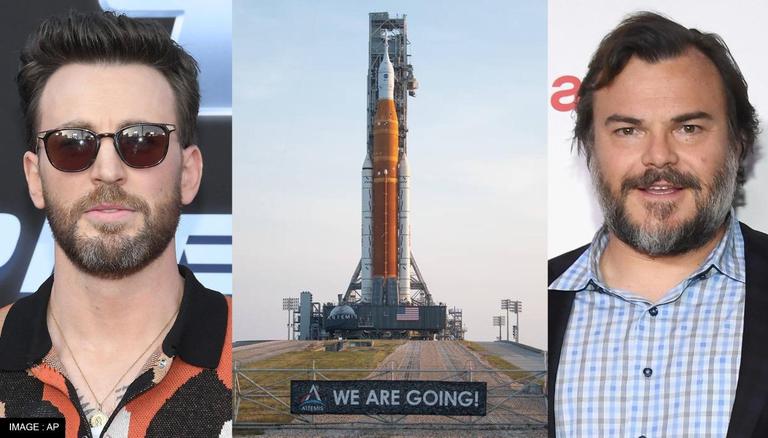 
Hollywood superstars Chris Evans and Jack Black will make special appearances during the live broadcast of NASA’s Artemis I launch, which is targeted for Monday, August 29. In addition to this, appearances from singer and actress Keke Palmer along with a special performance of “The Star-Spangled Banner” by Josh Groban and Herbie Hancock are also part of the pre-launch activities.

Moreover, NASA has also planned a performance of “America the Beautiful” by The Philadelphia Orchestra and cellist Yo-Yo Ma, which would be conducted by Yannick Nézet-Séguin.

Both Chris Evans and Keke Palmer are in the news for their 2022 release of the movie Lightyear. Recently, Evans even received an Artemis I boarding pass, that features his name and will be sent into space aboard the Orion spacecraft, during his promotional visit to NASA's Jet Propulsion Laboratory (JPL).

READ | NASA to rollout SLS rocket for Artemis I Moon mission on Aug 17; here's how to watch live

Dodd presented Chris with a boarding pass, where his name will be on the uncrewed #Artemis I mission to the Moon. The Artemis program is focused on learning more about the lunar surface & then taking the giant leap to sending the first astronauts to Mars. https://t.co/P03vrTwYxR pic.twitter.com/30eXoQd7qJ

Jack Black, on the other hand, shares a special connection with NASA as his mother, Judith Love Cohen, was a major contributor to the Apollo 13 mission. Among her many significant contributions, she helped design the Abort Guidance System (AGS) of the Apollo 13 spacecraft which helped the astronauts land safely.

READ | NASA's SLS rocket makes it to launch pad ahead of Aug 29 Artemis I launch; Watch

Feel inspired by the Moon? We do, too.

So we built the @NASA_SLS rocket & @NASA_Orion spacecraft to pay it a visit. If you create Moon-inspired content, we want to see it! Share your paintings, photos, & latte foam art with the hashtag #NASAMoonSnap: https://t.co/r6PGjI4wge pic.twitter.com/ZoUdGhkTqW

Launched on April 11, 1970, the Apollo 13 mission, which was NASA’s third Moon-landing mission, was cancelled after the oxygen tank of the spacecraft exploded 56 hours post-launch and the astronauts made a splashdown a few days later.

How to watch NASA’s live broadcast?

Owing to the grandeur of Artemis I, NASA will provide full coverage of the prelaunch, launch, and postlaunch activities for Artemis I starting at 4:30 am on August 23. You can watch all the activities by tuning into NASA TV, the agency’s website, the NASA app, or the agency’s official YouTube channel.

Notably, the launch countdown will officially begin at 8:53 pm IST on August 27 and the launch window opens at 6:03 pm on August 29.

About Artemis I mission

The Artemis I mission will kickstart NASA's Artemis Program through which the agency plans to return to the Moon and land the first woman and person of colour on the lunar surface. The first mission of this program will be uncrewed and will be launched using the 322-feet-tall Space Launch System (SLS) rocket, which would be mounted with the Orion spacecraft.

This week at NASA, we moved Artemis I to the launch pad, sent tech experiments to space, and discussed priorities for national space activities.

Check out our virtual event to share the upcoming Moon launch, and use #Artemis to continue the conversation: https://t.co/AsrZXXASC1 pic.twitter.com/CVTWDMv19C

This Orion spacecraft, on the other hand, will be carrying three mannequins through which NASA will gather data about the effects of spaceflight owing to the SLS rocket and the ability of Orion to shield astronauts from harmful radiation.