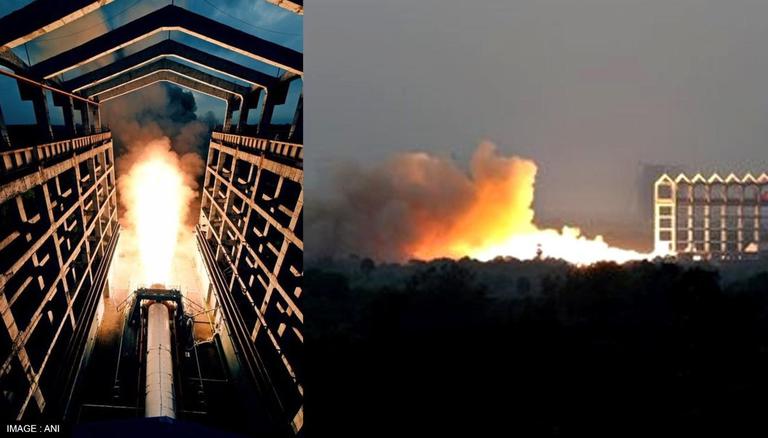 
In a landmark achievement, Indian Space Research Organisation (ISRO) has successfully completed the static test of human-rated solid rocket booster (HS200) at Satish Dhawan Space Centre (SDSC), Sriharikota, at 7.20 am Friday for its Gaganyaan programme. The heavy lift launcher, GSLV MkIII’s identification and the process for human rating of GSLV MkIII for India’s historic space mission was completed in 2020. In its first step towards its unmanned space programme, ISRO had developed the first critical booster segment of the motor case with a diameter of 3.2 meter, 8.5 meter in collaboration with the L&T and had flagged it off on November 13, 2020.

The human-rated GSLV-Mk3 that will be labelled as the HRLV is a crucial achievement towards the Gaganyaan mission. The first stage of the launch vehicle was tested by the ISRO scientists for its performance for full duration, an estimated 135 seconds. The 20m-long HS200 booster was loaded with 203 tonnes of solid propellant, and is the world's second largest operational booster of such a type. ISRO monitored approximately 700 parameters, and out of the three propulsion stages of GSLV-Mk3, the human rated version of L110-G loaded with liquid propellant is the second stage ahead of the final qualification.

India's first manned space flight mission 'Gaganyaan' is expected to launch next year in 2023, Union Minister Jitendra Singh had said in Rajya Sabha's questions. The first crewed flight will entail two unmanned launches, the first of which is scheduled to begin from the second half of 2022 followed by the second launch at the end of the same year. With the success of these flights, India will join the list of countries, including the USA, Russia and China, and become the fourth country with their own Human Spaceflight mission.

Earlier in 2018, Prime Minister Narendra Modi had stated that by 2022, India will send its first man or woman into a space odyssey but the plans were foiled due to the COVID pandemic. Ahead of the first manned mission, ISRO will conduct an uncrewed launch where a spacefaring robot named "Vyommitra." As for the preparations to launch actual humans, an astronaut training facility is being built in Bengaluru and is already at the advanced stage of completion.